After a year of playing in China, Kim Yeon-koung is heading back to Turkey after signing a two-year contract with Eczacibasi VitrA on Saturday. 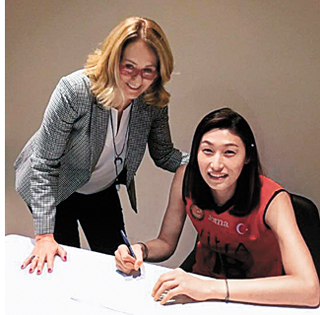 “I want to compete against the world’s best in the world’s top league once again,” Kim said.

“Kim will play for Eczacibasi until the 2020 Tokyo Olympics,” said InspoKorea, Kim’s agency, in a statement.

At the end of the 2016-17 season in Turkey, Kim transferred to Shanghai Bright Ubest. Kim chose to make the move for the flexible schedule and to be closer to Korea.

“Kim wanted to compete for another championship in a competitive,” said InspoKorea. “In China, a number of teams made great offers, but Kim was determined to play in Turkey.”

Based in Istanbul, Eczacibasi is one of the league’s top teams and won the FIVB Volleyball Women’s Club World Championship in 2015 and 2016.