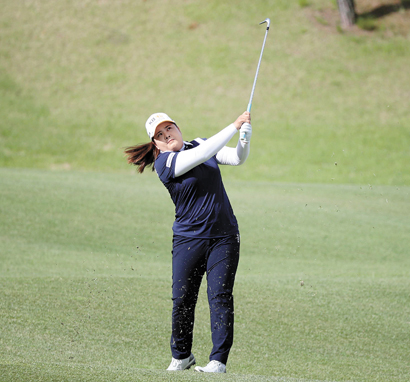 Park In-bee watches her shot during the final round of the 2018 Doosan Match Play Championship at Ladena Resort in Chuncheon, Gangwon, on Sunday. [KLPGA]

After 20 KLPGA Tour events, Park In-bee finally captured her first-ever KLPGA Tour victory by defeating Kim A-lam one up at the 2018 Doosan Match Play Championship at Ladena Resort in Chuncheon, Gangwon, on Sunday. 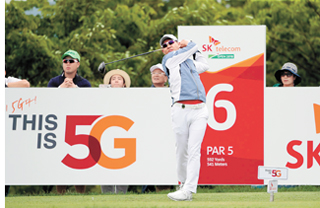 Kwon Sung-yeol watches his shot during the final round of the 2018 SK Telecom Open at Sky 72 Golf & Resort. [KPGA]

Park In-bee cruised through to the final, defeating Kim Hye-sun 6-and-4 and defeating Park Chae-yoon 9-and-7. Park In-bee’s final score against Park Chae-yoon was good enough to set a new record on the KLPGA Tour as the biggest margin of victory at a match play event. Park didn’t have much of a problem in the semifinal either, defeating Choi Eun-woo 3-and-2.

Paired with 35th-seeded Kim in the final, many expected Park to get another easy win, but it wasn’t too easy, as neither player made any mistakes. Currently ranked first in the KLPGA for average driving distance this season, Kim was playing at her best throughout the tournament.

It wasn’t until the back nine that Park started to extend her lead. By making a nearly 25-foot-long birdie putt on the par-3 13th, Park took the lead. Then, as Kim three-putted on par-4 15th, Park extended her lead by another hole. Even though Kim won the next hole, the par-3 16th, Park won the tournament one up.

Despite her successful career on the LPGA Tour, Park has never won a single KLPGA Tour event. She has wins on every tour - 19 wins on the LPGA, four in the JLPGA and one win on the European Tour - except for the KLPGA Tour, where up until Sunday, she had six runner-up finishes.

With the win, Park took home a cash prize of 175 million won ($162,120). In addition to the prize money, Park got to take home a forklift made by the tournament’s sponsor.

Though she hasn’t yet reached the halfway point of the season, Park’s return has been impressive so far. After two seasons marred by injuries, Park came back with a win at the Bank of Hope Founders Cup, her second tournament of the season. Following the victory in March, Park claimed the No. 1 spot on the Rolex Women’s World Rankings in April.

“The last match was very difficult,” Park said. “I felt that the first win didn’t come that easy. I made a bogey on the 16th because I started thinking about winning and got nervous.”

After a short break, Park will be heading back to the United States on Saturday to compete in the U.S. Women’s Open which starts on May 31.

The KLPGA Tour will continue at the 6th E1 Charity Open South Springs Country Club in Icheon, Gyeonggi, from May 25 to 27.

On the KPGA Tour, Kwon Sung-yeol had a surprise win at the 2018 SK Telecom Open at Sky 72 Golf & Resort at Incheon on Sunday.

With a bogey and four birdies, Kwon tied the lead with Ryu Hyun-woo at 13 under par, forcing the tournament to a sudden-death playoff. At the first playoff hole, the par-5 18th, both Kwon and Ryu made par. Playing the same hole again, Kwon made birdie, and picked up his first-ever KPGA Tour victory.

After becoming professional in 2007, Kwon made his KPGA Tour debut in 2013 but remained a virtual unknown, as his best finish on the Tour was being tied for fifth at the 2017 Tee-up & G-swing Mega Open.

Choi E-sak, the leader until the par-4 15th, missed his chance to take home his first KPGA Tour with a bogey, double-bogey and a par finish. Choi finished tied for third along with Kim Tae-woo at 12 under par.

Choi Kyung-ju finished tied for 35th at one under par.

The KPGA Tour will continue at the Genesis Championship at Jack Nicklaus Golf Club Korea in Incheon from May 24 to 27.