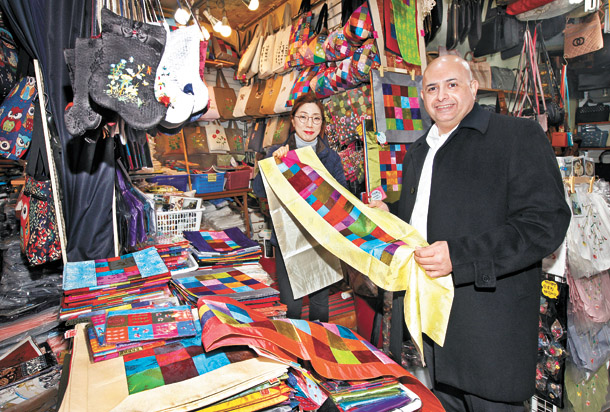 Every great capital has a diplomatic corps representing its country and culture. Our latest series “Capital Connections” focuses on the diplomatic community in Seoul. Here we invite ambassadors to introduce a part of Seoul that they have come to love as well as a part of their home city, connecting readers to two spots in the world that they have come to call home. - Ed.

Reminiscent of when he used to visit the marketplace by the sea with his father, the ambassador of Kuwait, now himself a father to two sons and a daughter, takes his children to a marketplace in the center of Seoul.

“My father always liked to walk in the traditional market to buy everyday things,” said Ambassador Bader Mohammad al-Awadi. “I guess I get it from him. When my children visit, the Namdaemun Market [in central Seoul] is a stop we make together.”

When the Korea JoongAng Daily trailed his usual stopovers at the market, it was apparent that he was fond of the marketplace.
“I love walking, so I walk from my home to the marketplace, sometimes with my residence staff,” he said. “That way, we discover a lot of things on the way together.”

Stopping by the market has become something of a habit for the ambassador.

“This is the place where they sell good dried fruits,” he said, before the owner stepped out of the shop to embrace the ambassador.

“And this is where you can find good dried seaweed,” he mentioned as he gestured toward a string of dried seaweed shops.

The vendors at a red ginseng shop also stepped out to greet the top envoy. Only after offering him cups of red ginseng tea did they let him go.
However, it seemed that the ambassador enjoyed making friends at the marketplace incognito.

“Sure, we love him! He comes by every other week or so,” said the vendor of a dried fruit stall. “We haven’t asked him what he does for a living, but he sure is a friendly guy.”

The following is an excerpt of the interview with the ambassador of Kuwait in Korea about his adventures connecting with ordinary citizens in the two countries.

Souk al-Mubarakiya, one of the oldest traditional markets in Kuwait, is located in Kuwait City, near the Arabian Sea. [PARK SANG-MOON]

Q. Would you say marketplaces are good representatives of a country’s culture?

A. Yes, of course. Spending time in Namdaemun Market gave me many opportunities to learn about Korea and Koreans as it is a market full of stores that sell everything, including various traditional foods and cultural handcrafts. The most important feature of this market is that you can deal directly with “real” local people in a natural manner.

Many people at the market seem to know you well.

Here in Namdaemun Market, a lot of ajummas and ajussis call me with their loud voices and big gestures to bring me into their shops or stands; they talk to me in broken English or just Korean, even though they clearly know I cannot speak the language well; they laugh and tap me on the back when I buy their products. All good memories in the end.

I made a lot of friends through meeting locals at markets in the host countries of my postings. In Cuba, there was a big marketplace in Havana that sold traditional paintings and handicrafts. You enter and it’s like entering a party, there is music everywhere, everyone is eating and laughing and having a good time. I will never forget this market. I visited in January during vacation, and people still remembered me. I remember in France, there was a market that would move from place to place daily, selling everything from vegetables to clothes. And once the people know you, they begin to talk to you, ask you how the meat was, the lamb and so on.

Which marketplace in Kuwait would you like to introduce to the readers?

I would like to introduce Souk al-Mubarakiya. It is one of the oldest souks [markets] in Kuwait. Just like Namdaemun Market, it is a popular traditional market which attracts all generations of the Kuwaiti population, as well as tourists from the Gulf Cooperation Council countries and all over the world. It is a great place to experience both the modern and traditional culture of Kuwait.

Koreans would definitely find some similarities between Namdaemun Market and Souk al-Mubarakiya, such as the long endless lines of stores and stands that sell excellent traditional food, clothes, Arabic perfumes, sandals, decorations, living necessities [and] artworks. Within the market there are also two small museums — Sheikh Mubarak Kiosk and the First Islamic Pharmacy in Kuwait, where Koreans [can] acquire some historical knowledge about Kuwait. All in all, this market has been around for at least 200 years, so the entire market itself will definitely serve as a great place to learn about the culture and history of Kuwait.

When is the best time to visit?

Spring, autumn and winter are the seasons that I recommend others to visit the Souk because it will be hot in the summer. Both daytime and nighttime are all right, but if I have to choose, I recommend visiting during the nighttime to enjoy more restaurants and activities.

Not only the Kuwaiti citizens but also Arabs from all over the gulf area come and visit the Souk, especially during the time of Kuwait’s National and Liberation Day. During that time, large-scale cultural events take place in the Souk. From the beginning to the end of February, events similar to large carnivals take place.

Is there much of a bargaining culture in Kuwait as well? Would you say you’re good at bargaining?

Well, I’m a diplomat (laughs). But yes, bargaining is big in the markets in Kuwait, too. Sometimes it’s not about money, though. In trying to bargain for a price, you get the vendor to talk. Some of them get angry or happy while bargaining. Sometimes I would bargain with them but end up paying them the price they initially called. They’d ask why I bothered bargaining in the first place. It’s just to let them talk. You live every day dealing with serious issues at work, but here at the marketplace, you can talk about the food, the weather, everyday things. It changes your mood.

What are your thoughts on local renovations and preserving traditional markets?

In Kuwait, the new generation started to be aware of how important this part of Kuwait is for the country’s history and tourism. So they started to modernize it — many Kuwaiti chefs started to open restaurants in the area, cafes were opened, those in the fashion field opened up stores, painters and local renovators came in to make the market more beautiful.

The Souk has undergone a renovation to hold both the “new” and “old.” Parts of it are still old and traditional, but other parts include shops, stores, restaurants and galleries owned by young artists and entrepreneurs of Kuwait who add a modern “twist” to the Souk. I think the preservation of the “old” and “traditional” flavor is important.

Perhaps our two countries can work together in this. Namdaemun Market is already known as one of the major tourist attractions of South Korea among Kuwaitis who like traditional markets, but perhaps the two countries can enhance the services for Kuwaiti tourists or further promote the market with a more foreigner-friendly atmosphere or more foreign-friendly activities other than simply eating and shopping.
However, I do not think the market should be modernized in ways that [would have] it lose its traditions. Namdaemun Market, I find it beautiful as it is, with its bending roads and streets and bustling and laughing people.

Korea and Kuwait established diplomatic ties on June 11, 1979, and the two countries will celebrate 40 years of bilateral ties next year. Kuwait is Korea’s second-largest provider of crude oil. According to the Kuwaiti Embassy in Seoul, Korean companies have won contracts for several projects in development and infrastructure plans on roads, oil facilities and housing in the 2035 Kuwait Vision, worth around $30 billion. Last year, the two countries agreed to cooperate on the South Saad Al-Abdullah Smart City Project. The ongoing bilateral project for the Sheikh Jaber Al-Sabah Causeway, whose construction is led by Hyundai E&C, is expected to be completed by the end of this year with a distance of 22 miles. Former South Korean President Park Geun-hye visited Kuwait in 2015, and Kuwaiti Prime Minister Sheikh Jaber Al-Mubarak Al-Hamad Al-Sabah visited Korea the following year.

Ambassador Bader Mohammad al-Awadi was posted to Korea in December 2016. The top envoy was previously the Kuwaiti ambassador to Cuba, and simultaneous non-resident ambassador to Saint Lucia, the Dominican Republic and Antigua and Barbuda. Ambassador al-Awadi has also represented the country in the permanent mission of Kuwait to the UN in New York from 1995 to 2004, when he addressed the situation between Kuwait and Iraq. In his free time, he likes to play sports, especially football, take walks and listen to classical and traditional Kuwaiti music, as well as music from all over the world.