Stars dress their best for the royal wedding

Stars dress their best for the royal wedding 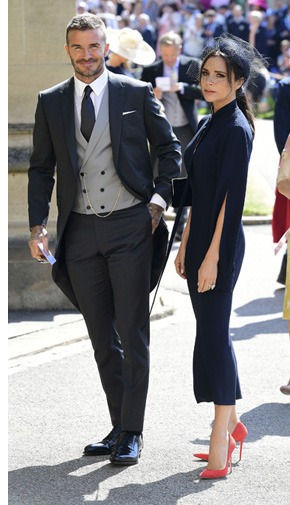 They were among a slew of celebrities among the 600 guests Prince Harry and Meghan Markle invited to their wedding ceremony on Saturday, an event from which politicians were excluded.

Indian actress Priyanka Chopra, a friend of the bride’s, strutted into the chapel in a light heather grey Vivienne Westwood pencil skirt and matching jacket with an asymmetric collar.

Tennis star Williams, accompanied by her husband, Reddit co-founder Alexis Ohanian, chose a blush, long-sleeve silk drape dress by Atelier Versace to go with her fascinator in pale pink, a hue also favored by Winfrey and others for the royal wedding.

Elton John, looking dapper in tails, did double-duty as a wedding guest and a performer at the luncheon reception hosted by Queen Elizabeth II. He sported pink eyeglasses as he arrived with husband David Furnish.

John was a close friend of the groom’s late mother, Princess Diana, and played his hit “Candle in the Wind” at her 1997 funeral. Kensington Palace did not disclose which songs he chose for the wedding.

George and Amal Clooney, James Corden and David and Victoria Beckham also watched the nuptials on the grounds of Windsor Castle - Ms. Clooney in a bright yellow Stella McCartney dress and matching hat.

Actress Carey Mulligan shined in an all-over yellow floral print dress with a high neck and short sleeves from Erden. She was accompanied by husband Marcus Mumford of the band Mumford & Sons. AP