Koo Bon-moo, the longtime chairman of LG Group who transformed the country’s fourth-largest conglomerate into a global brand, passed away on Sunday morning at the age of 73.

The company said in a statement that he died peacefully in the presence of his family. For the past year, he had been battling brain disease and underwent several rounds of surgery, with the most recent one at Seoul National University Hospital.

His funeral will take place in private. The family has refused to accept outside visitors or condolence flowers. “We will appreciate condolences from your heart,” the family said in a statement through LG. “We want to follow his tendency of refraining from excessive formality and hassle.”

However, some business leaders and government officials, including Lee Jae-yong, vice chairman of Samsung Electronics, and Jang Ha-sung, chief policy maker at the Blue House, visited the hospital to pay their respects on Sunday.

Koo Bon-moo is survived by his father Koo Cha-kyung, 93, who still holds the title of honorary chairman at LG Group; his wife, Kim Young-shik; their adopted son, Koo Kwang-mo, a senior executive at LG Electronics; and two daughters. 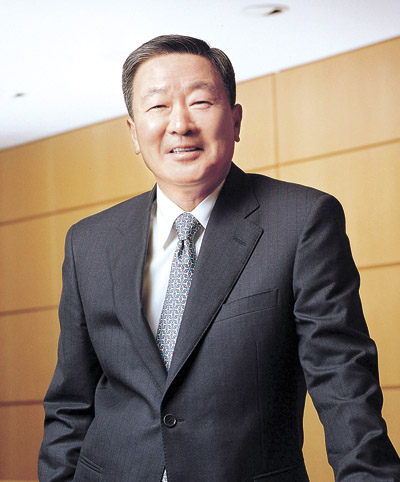 The grandson of company founder Koo In-hwoi, Koo Bon-moo took over LG Group in 1995. He was instrumental in turning the conglomerate into a global brand with businesses in chemicals, electronics, appliances and telecommunications. His first step as chairman was changing the company’s corporate identity from Lucky-GoldStar to LG. He led the group’s shift to a holding company structure and emphasized trust and respect during his 23 years at the helm.

“Let’s build a company that is respected by the people and society,” he told employees in a New Year’s message at the beginning of 2017. “We can’t sustain ourselves if we fail to earn recognition and trust from society, however advanced the business structure and management system is.” The remarks were his last official statement before passing away.

With its chairman ill, LG prepared a handover to the family’s fourth generation. Last week, the board of LG’s holding company, LG Corporation, named Koo Kwang-mo, 40, as an internal director. Koo Bon-moo adopted Koo Kwang-mo from his younger brother, Koo Bon-neung, the chairman of Heesung, in 2004 to carry on family ownership of the company.

An extraordinary shareholders’ meeting has been scheduled for June 23 to confirm the promotion. The heir apparent is the third-largest shareholder of LG Corporation with a 6.24 percent stake.

“Chairman Koo fostered the electronics, chemical and telecom industries with a spirit that challenged the future,” the Korea Chamber of Commerce and Industry said, “and worked to build a business trusted by customers through his signature fair management practices.”

“The Korean economy has been able to enjoy its present prosperity and glory, and both businesses and people can dream about the future, thanks to Chairman Koo,” the Federation of Korean Industries said.