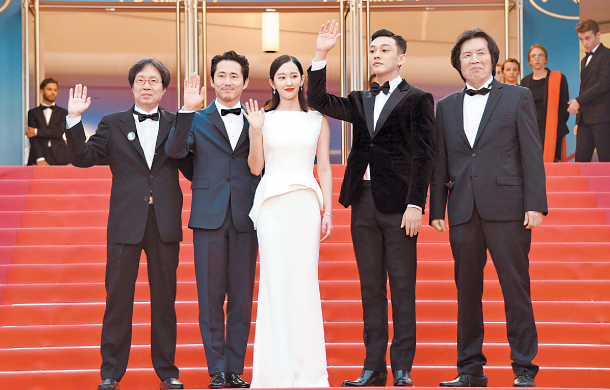 Director Lee Chang-dong’s thriller “Burning” was awarded the Fipresci International Critics’ Prize for best film in the main competition section of this year’s Cannes Film Festival in France on Saturday. It is the first time that a Korean film has won the award.

The Fipresci jury, led by France’s Michel Ciment, praised the award as a “visually stunning film and an emotionally complex comment on contemporary society.”

Upon receiving the award, Lee said he is thankful that his work is being well received.

“‘Burning’ is a mystery exploring reality and unreality, what is present and what is not and what is visible and what is not,” the director said as he picked up the prize during the awards ceremony. “I’m thankful for the warm reception you gave to my work.”

The film, which is about the insecurity and anger of young people, premiered in the festival’s Competition section and it received a five-minute standing ovation after its screening on Wednesday. Reports say that the actors who starred in the film, including Yoo Ah-in, Steven Yeun and Jeon Jong-seo, shed tears of joy upon such a response.

The film’s art director Shin Jeon-hee also won the independent Vulcan Award of the Technical Artist at the festival, making Shin the second Korean ever to receive the prize. Art director Ryu Sung-hee received the prize for “The Handmaiden” directed by Park Chan-wook in 2016. The Vulcan Award is an independent award which was created in 2003, and is presented by the Superior Technical Commission of Image and Sound after the closure of the annual festival to films with the best technical achievements in art, sound and filming in the competition.

At the closing ceremony, the Cate Blanchett-led jury selected the film, which was one of the festival’s most acclaimed entries, hailed as a modest masterpiece from a veteran filmmaker renowned for his delicate touch. “Shoplifters” is about a small-time thief who takes a young girl home to his family. After seeing scars from abuse, they decide to keep her and raise her as their own.

While many speculated that the Cate Blanchett-led jury might award only the second Palme d’Or to a film directed by a woman, the most likely contender - Lebanese director Nadine Labaki’s “Capernaum” - was instead given Cannes’ jury prize. The film drew a rousing standing ovation at its premiere Thursday but less enthusiastic critic reviews for its tale of a 12-year-old boy living in poverty who sues his parents for bringing him into such a cruel world.

Spike Lee’s “BlacKkKlansman,” the highest-profile American film in competition at Cannes, was awarded the grand prize. The film ignited the festival with its true tale of a black police detective who infiltrated the Ku Klux Klan. Lee connected the film to the modern day with real footage from last year’s violent white supremacist march in Charlottesville, Virginia.

“I take this on the behalf of the People’s Republic of Brooklyn, New York,” said Lee, accepting his award.

Polish filmmaker Pawel Pawlikowski took best director for his follow-up to the Oscar-winning “Ida,” “Cold War.” The black-and-white period film delves into Polish history. The first Polish film in Cannes’s competition in 37 years, “Cold War” is about an up-and-down romance in post-war Poland and Paris, behind and outside the Soviet Iron Curtain. Pawlikowski has been critical of Poland’s current right-wing government.