Each year, when the weather warms up and the flowers start to bloom, Seoul hosts a series of wide-ranging concerts to break the stereotype of classical music as an old, boring genre.

One of those music events, the Seoul Spring Festival of Chamber Music (SSF) is now in its 13th year. The festival, which kicked off on May 15, will run through May 27 at several venues, including the Sejong Center for the Performing Arts in central Seoul, the Seoul Arts Center in southern Seoul and the Catholic Church Center in Gimpo, Gyeonggi.

The theme of this year’s edition of the SSF is “Carte Blanche,” a French phrase that means complete freedom to act as one wishes or thinks best. A total of 16 pieces will be performed in the course of the 13-day festivity, directed by Korean violinist Kang Dong-suk.

Since 2006, this festival follows the motto of “friendship through music,” bringing together Korean and foreign pianists, wind and string instrumentalists to perform classical music.

“This festival brings together everything that I think is important to chamber music, which is such a rich art form. It’s like finding treasures that are not only famous and familiar but also [unfamiliar],” said Edward Arron, an American cellist, during a press conference in Seoul on Monday May 14.

The main purpose of this international festival is to provide an opportunity for citizens to enjoy smooth, melodic classical music. “[Additionally], many people tend to regard contemporary music as ugly…. so we are trying to make it beautiful,” said award-winning pianist Mookie Lee-Menuhin. 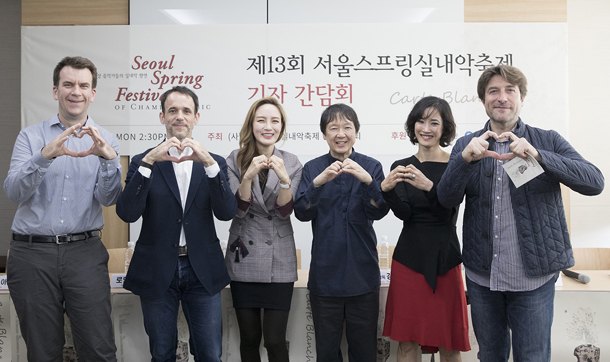 Tickets for the 16 concerts are relatively affordable, and cost no more than 60,000 won ($54). Tickets to the family concert cost only 20,000 won per seat. Only the special brunch concert held at the hanok (traditional Korean home) of former President Yun Posun is priced at 150,000 won per seat.

In addition, according to Kang, this festival will be presenting rarer pieces from classical composers, such as Jeremy Menuhin’s new chamber piece “Suite for two Pianos,” which he worked on for three years. The piece’s debut in Korea was played by his wife, Mookie Lee-Menuhin, yesterday at the Catholic Church Center.