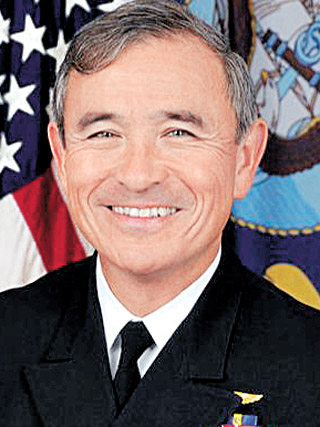 WASHINGTON - U.S. President Donald Trump on Friday nominated Adm. Harry Harris, the outgoing chief of the U.S. Pacific Command, to be the ambassador to South Korea, filling a post that has been vacant for more than a year with a military officer who will likely take a hawkish stance on North Korea.

If confirmed by the U.S. Senate, Harris will be the first admiral and highest-ranking military officer to serve as the U.S. ambassador to South Korea. The post has been vacant for over a year since Mark Lippert, who served under President Barack Obama, stepped down in January 2017 with the inauguration of Trump.

Harris currently leads the U.S. Pacific Command (Pacom) and has 40 years of experience in the Navy. After graduating from the U.S. Naval Academy in 1978, he became a flight officer and rose through the ranks. Harris comes with “extensive knowledge, leadership, and geopolitical expertise in the Indo-Pacific region,” the White House said in a statement on Friday.

Trump initially tapped Harris to be ambassador to Australia in February, and the Australian government had approved the choice, but his appointment was suddenly thrown into uncertainty when the Trump administration asked the Senate Foreign Relations Committee to postpone his confirmation hearing for the Canberra post.

U.S. Secretary of State Mike Pompeo, then serving as director of the Central Intelligence Agency, reportedly pushed for Harris’ placement in Korea. According to a source, Pompeo made a stop in Hawaii on his way to Pyongyang in March to ask him about the post.

Harris reportedly said he was willing to serve in Seoul but was concerned about his Japanese-American background. Harris was born in Yokosuka, Japan, to a U.S. Navy officer who served during World War II and the Korean War and a Japanese mother who later naturalized in the United States. According to the source, Pompeo responded that it was more important how close the next ambassador would be with the president and secretary of state.

If the Senate confirms him, Harris could take the post as early as next month, in time for a summit between Trump and North Korean leader Kim Jong-un, or in July. The admiral is expected to be hawkish when it comes to North Korea. During a Senate Armed Services Committee hearing in March about the security situation in the Pacific, Harris said Kim would “do a victory dance” if the United States abdicated its alliance with South Korea and Japan.

The U.S. Embassy in Seoul welcomed the announcement from the White House.

“If confirmed by the U.S. Senate, Admiral Harris will bring a wealth of experience to the position,” the embassy said in a statement on Saturday. “His senior positions at Pacom and other U.S. commands around the world, as well as his time as the representative of the Chairman of the Joint Chief of Staff to the Secretary of State, give him an intimate understanding of U.S. policy priorities from a whole-of-government perspective.

“Provided Admiral Harris receives U.S. Senate approval, we look forward to welcoming him to the U.S. Embassy in Seoul and to working with him.”

Marc Knapper, a career diplomat and charge d’affaires at the embassy, has been acting as the ambassador since January 2017.