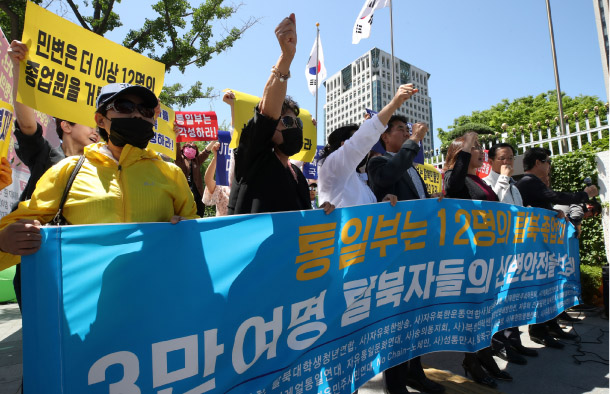 Members of North Korean human rights civic organizations hold a rally Saturday in front of the government complex in central Seoul protesting the repatriation of the 12 North Korean waitresses who defected in 2016, and also calling for the protection of defectors’ identities. [YONHAP]

North Korea on Saturday called for the immediate repatriation of 12 North Korean defectors who arrived in the South in 2016, claiming they were lured and kidnapped by the South’s spy agency to score political points ahead of the general elections.

Pyongyang also noted it will take Seoul’s response to its demand as the sign of the latter’s sincerity in wanting to improve inter-Korean relations while calling for those involved to be punished.

In an English dispatch carried by the state-run Korean Central News Agency (KCNA), an unnamed spokesman of the North’s Red Cross said the defection of 12 former employees at the state-run restaurant in the Chinese city of Ningbo was “proven to be a conspiratorial farce cooked up” by the Park Geun-hye administration.

The North’s demand for the immediate return of the 12 female defectors came nine days after local broadcaster JTBC aired a report in which a former restaurant manager named Huh Gang-il said that he had taken the 12 workers, who were working as servers at the North Korean restaurant in Ningbo, across the border to the South Korean Embassy in Malaysia for a group defection to Seoul in April 2016.

The manager claimed that he planned to defect with his wife after growing disillusioned with the North Korean regime following the execution of more than five friends from college and Jang Song-thaek, the uncle and political mentor of North Korean leader Kim Jong-un.

Disgruntled with the Kim Jong-un regime, he became an informant for the South’s main spy agency, the National Intelligence Service (NIS), and asked to defect when his cover was about to be blown.

The former informant told JTBC that the NIS official told him to take North Korean restaurant servers under his supervision. The manager said that when he declined, the official threatened to report him to North Korean authorities.

Cornered by the threat of blackmail, the manager said he did as he was told, taking the 12 female restaurant workers with him across the border to defect to the South.

Of the 12 defectors, four appeared in the JTBC interview. One anonymous interviewee said that it was only after she saw the South Korean flag at the embassy in Malaysia that she realized she was defecting to the South.

Citing the report, the North referred to the manager as “a criminal involved in the case” and accused Seoul of “adopting an unequivocal stance to shun the demand of the public at home and abroad.”

The group defection was highly publicized by the Park Geun-hye government, a rare move considering that the government usually does not promote North Korean defections for security reasons. The timing of the announcement, five days before the general election, raised suspicions that the conservative government was publicizing the group defection for political purposes.

North Korea on Saturday implied that it could break its agreement made with the South at the inter-Korean summit last month to hold a family reunion of separated families on Aug. 15, Liberation Day, if the 12 defectors are not returned. The South’s inaction, it said, “will have great impact on deciding the prospect of settling the humanitarian issue between the North and South clarified in the Panmunjom Declaration.”

Unification Minister Cho Myoung-gyon told lawmakers Thursday at the National Assembly that the government’s position that all 12 defectors came to the South of their own free will had “not been changed” while relevant agencies were looking into the case.

Solving the issue will not be a simple matter, experts say.

“Returning the 12 defectors will be an acknowledgement by the South that it was a state-orchestrated scheme against the North. And the North will not back down from its demand because doing so would be an acknowledgement that they defected on their free will,” said Koh Yu-hwan, a professor of North Korean studies at Dongguk University.

“This is a highly complicated matter that may require a decision at the highest government level in the South and North.”