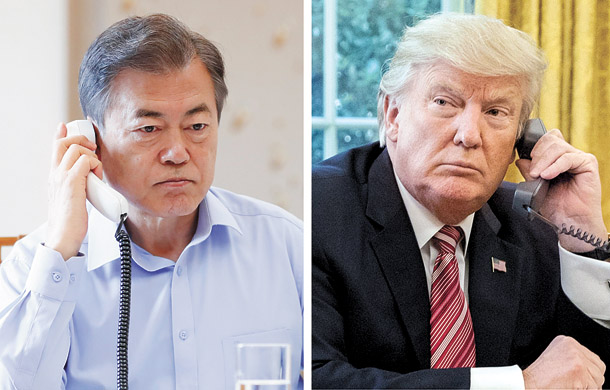 President Moon Jae-in, left, spoke on the phone with U.S. President Donald Trump for 20 minutes on Sunday morning, one day before a scheduled trip to Washington. [YONHAP]

President Moon Jae-in spoke with U.S. President Donald Trump over the phone on Sunday, one day before he was set to leave for Washington to meet with Trump in the White House.

The two leaders exchanged opinions on “many responses that North Korea has shown in recent days” during their 20-minute conversation on Sunday morning, the Blue House said, referring to recent threats by North Korea to pull out of talks with the United States. North Korean leader Kim Jong-un is scheduled to meet with Trump in a highly anticipated summit on June 12 in Singapore.

Yoon Young-chan, Moon’s senior secretary for public affairs, said the two presidents agreed in their conversation to closely coordinate with each other through events like their upcoming meeting together to ensure the North-U.S. summit is successful.

But the timing of the phone call, just days before Moon was set to meet with Trump in person, raised questions about why it was necessary. A senior presidential official speaking on the condition of anonymity told reporters there had been no change in the status quo and that Moon and Trump simply exchanged views on the current diplomatic environment involving North Korea.

“Given the call was made at late night Washington time, it appears to show strong determination from Trump for a successful North-U.S. summit,” the official said.

The call came days after North Korea made a sudden about-face and threatened to walk away from the summit. On Wednesday, Pyongyang denounced Washington for insisting on the so-called Libya model, in which the North would have to rid itself of nuclear weapons and ballistic missiles in a complete, verifiable and irreversible manner as a precondition for sanctions relief and economic aid.

In particular, the North singled out Trump’s national security adviser, John Bolton, for insisting on such a framework and demanding all nuclear materials be transported to an American research facility in Oak Ridge, Tennessee, a position that rattled the North. Pyongyang said it would not hide its “feelings of repugnance” toward Bolton for his hawkish stance.

In an apparent move to placate the North, Trump said Thursday that he was not seeking the Libya model with the North. “The Libyan model isn’t a model that we have at all when we’re thinking of North Korea,” Trump said, contradicting a remark that Bolton made last month that the White House was “looking at the Libya model of 2003 and 2004” for the North’s denuclearization.

While Pyongyang raised uncertainty over the prospect of the upcoming summit with Washington last week, a North Korea analysis website reported Friday that “additional steps” toward closure of the North’s nuclear test site in Punggye-ri, North Hamgyong province, have been taken, citing its analysis of satellite imagery from Tuesday.

The website, 38 North, said such steps possibly included “preparations to build a safe reviewing stand for visitors to observe the explosive closure of all three Punggye-ri portal areas.”

North Korea, through its state-run propaganda website DPRK Today, called the dismantling of the Punggye-ri site a “significant measure” on Sunday.