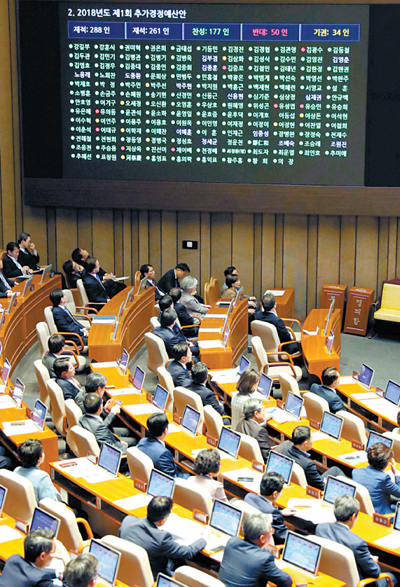 The supplementary budget is passed at the National Assembly on Monday in Yeouido, western Seoul. [YONHAP]

During Monday’s session, 177 out of 261 sitting lawmakers voted in favor of the bill, and 50 against it. Some 34 decided to abstain.

The approved bill was about 20 billion won less than the initial proposal by the Ministry of Strategy and Finance on April 6, which was over 3.85 trillion won.

During a review session over the weekend, the budget committee cut 398.4 billion won from the original proposal while adding 376.7 billion won. It reduced the amount allocated to subsidize public transportation for young Koreans working at small to mid-sized companies. The government initially proposed to give 100,000 won a month in transportation reimbursement to qualified recipients. This was lowered to 50,000 won during the review session. The committee also trimmed the amount assigned to subsidize electric vehicle purchases and to expand the number of charging stations across the country. The 376.7 billion won added by the committee included 21.1 billion won in aid for auto parts suppliers.

The extra budget was drawn up by the Finance Ministry earlier this year. The express purpose of the budget is to relieve unemployment among the local youths, which Kim Dong-yeon, the finance minister, described as a “national crisis,” and to inject cash into regions hit hard by layoffs following prolonged slumps in industries such as shipbuilding and automobiles.

According to details provided by the Finance Ministry on Monday, 200 billion won out of a 250 billion won reserve fund was also allotted as assistance to regions hit by mass layoffs. About 80 billion won will be spent to maintain or build infrastructure such as highways in the regions designated as crisis zones such as Geoje, Tongyeong, Goseong, Ulsan and Gunsan. About 27 billion won was also earmarked for the development of Saemangeum, a reclaimed tidal flat on the coast of the Yellow Sea in North Jeolla, designated as a site for a large industrial complex.

“Now that it’s gained approval from the National Assembly, the government will immediately follow through with the plan and execute the bill as specified,” said an official from the Finance Ministry.

The supplementary budget bill greenlighted on Monday was the second in two years for the Moon Jae-in administration.

In 2017, the government spent about 11 trillion won to create jobs and improve the working environment for local youth. That budget concentrated on expanding jobs in the public sector.

The number of new jobs created in April stood at 123,000, the third consecutive month that the figure hovered around 100,000 range, the worst since the global financial meltdown of 2008.