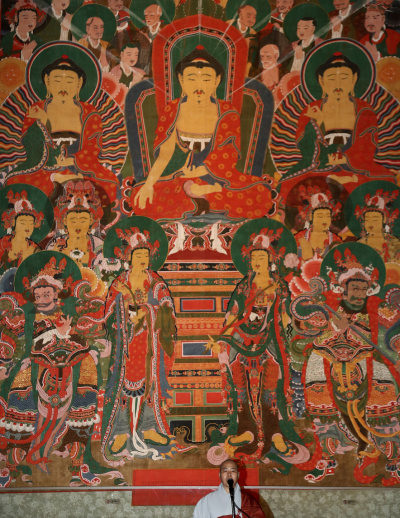 The head monk of Yongheung Temple in Sangju, North Gyeongsang, speaks in front of the large hanging scroll painting featuring Shakyamuni Buddha, Bhaisajyaguru Buddha and Amitabha Buddha, at the opening of the exhibition at the National Museum of Korea, central Seoul. [YONHAP]

Today is Buddha’s birthday, and in Korea, like many other Asian countries, the holiday is celebrated as a grand festival. Colorful lanterns are hung up throughout the streets of central Seoul well ahead of the actual day, and schools and offices are closed for the occasion.

There’s a special exhibition being held at the National Museum of Korea in central Seoul for the holiday as well. A large hanging scroll painting featuring three Buddhas - Shakyamuni Buddha, Bhaisajyaguru Buddha, and Amitabha Buddha - is currently hanging in the Buddhist Painting Gallery located on the second floor of the museum. The three Buddhas in the painting are participating in a gathering together with about a dozen of other disciples. It is hosted by Shakyamuni, who is sitting in the center, signaling the start of the gathering by beaming seven streaks of bright light from his body.

The grand size of the painting, which measures 10 meters (33 feet) in height and six meters in width, covering the whole wall of the exhibition hall, is enough to make visitors’ jaws drop. 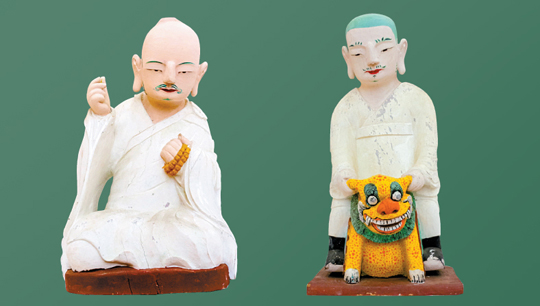 Left: Two Arhats statues are on display at the exhibition including No. 5, right, holding a rosary. The sculpture is 75 centimeters (2 feet 5 inches) tall. Right: The other Arhat sculpture is No. 16, left. It is 77 centimeters (2 feet 6 inches) tall and is riding an animal that looks like a tiger. There are about 30 Arhats statues at Yongheung Temple in Sangju, North Gyeongsang. [NATIONAL MUSEUM OF KOREA]

The National Museum of Korea has been exhibiting hanging scrolls paintings, known as gwaebul, to commemorate Buddha’s birthday since 2006. This year’s exhibition, titled “A Gathering of the Three Buddhas: Buddhist Hanging Scroll at Yongheungsa Temple,” is the museum’s 13th of its kind.

“There are about 110 gwaebul paintings that exist today, but only five feature all three Buddhas,” said Kim A-reum, the curator of the exhibit, explaining the exhibited painting’s rarity.

The painting belongs to the Yongheung Temple in Sangju, North Gyeongsang, and it was painted in 1684 by about 90 people, according to the museum. It is designated as Treasure No. 1374. Yongheung Temple is said to have been built during the Unified Silla period (676-935).

According to Kim, the Shakyamuni Buddha is the ruler of the secular world, therefore he emits light from his body. Bhaisajyaguru Buddha rules the world that has no ailments or pain as he is the Buddha of healing and medicine, while Amitabha Buddha rules the Land of Happiness.

“People looked at the three Buddhas and prayed for a long life free from illness and rebirth in the Western Paradise,” said Kim. “Considering the fact that the painting is 330 years old, it is quite well-preserved. The colors are still vivid and various patterns like the flowers, vines and clouds make me gaze with awe.”

The museum said it will “probably be a once in a lifetime opportunity to see this gwaebul at the museum” because the painting is usually stored for preservation.

Alongside the gwaebul, the exhibit is also displaying sculptures of Arhats (the ideal of a disciple of Buddha) with humorous facial expressions, as well as a painting of guardian deities, known as Sinjungdo, and a painting of the Fifth king of Hell, known as Hyeonwangdo.