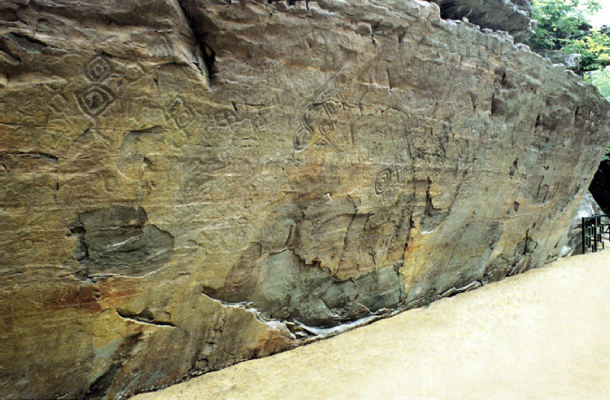 These petroglyphs (figures, pictures and Chinese characters) were made on the rocks along the mid-stream area of Naegok Stream, which is a tributary of Taehwa River in Ulsan.

The upper and lower sides of the rocks contain petroglyphs that differ in content and techniques used.

The upper side contains petroglyphs made by chiseling.

The inscriptions include geometric patterns, animals and abstract human figures.

There are concentric circles with a round figure looking like the sun at the center, four running deer next to them and several semihuman animals.

The figures with simplistic expressions and symbolism appear to have been made during the Bronze Age.

The lower side contains line-drawn pictures mixed with Chinese characters.

They include a procession of horse riders, animals, including dragons, and boats.

In particular, the procession of horse riders appears in three different places.

The boats provide researchers with important information on the offshore activities carried out by people of the Silla Dynasty (57 B.C. to A.D. 935).

The 800-plus Chinese characters are about the king and queen’s visit to the place.

They were presumed to have been inscribed on two occasions during the reign of King Beopheung (r. 514-540) of the Silla Dynasty.

The content on the official positions and the government system makes them precious material for those studying the Silla Dynasty during or around the sixth century.

The petroglyphs were made by many people over an extended period of time, providing vivid information on the life and thoughts of people from prehistoric times to the Silla Dynasty.