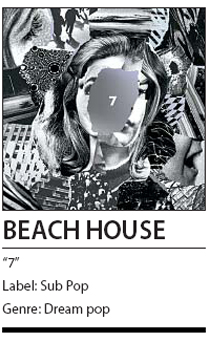 When is a number just a number and when is it much more? Seven is a mystical digit sometimes representing perfection, and it appears in grand notions like Seventh Heaven or the Seven Seas. In the case of Beach House’s “7,’’ it also refers to Victoria Legrand and Alex Scally’s seventh full-length album, with their joint output at 77 songs and the last song on the record seven minutes long.

Furthermore, the band also notes the visual similarity between one and seven, considering the latter as an ideal opportunity for a career restart.

Opener “Dark Spring’’ has a Cure-like opening drum fill, and just when its psychedelic vibes are about to pull you under, the brightness of the refrain brings light. “Dive’’ is similarly bipolar with a dreamy start and a manic conclusion, while ballad “Pay No Mind’’ is defined by its drums’ slow thump that anchors the etherealness of the rest of the track.

All in all, “7’’ distills the best of Beach House so far, searches far and wide for new elements and probes fresh depths and elevations and - to put a number on it - cranks them up to 11. AP