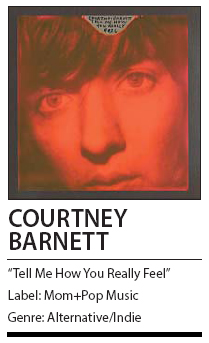 “I need a little time out,’’ Courtney Barnett pleads on the plaintive signature tune of her third full album. Thank the down-under gods that she wasn’t too sick of herself - and us - to forge on after the first two.

Captivating as ever, the Melbourne phenom sings her heart out on the 10-track “Tell Me How You Really Feel.’’

From the haunting psychedelic rock of “Hopelessness’’ to the edgy, throbbing “I’m Not Your Mother, I’m Not Your Bitch,’’ Barnett’s grunge garage-band roots show in a really good way.

Throughout, she sounds just like she did on her first EP way back in 2012 - like a bored street kid who, still wiping sleep from her eyes and nocturnal hoarseness from her waifish voice, absentmindedly picked up a left-handed Telecaster and let it rip.