Recalling a passion for music on Ulleung Island

Recalling a passion for music on Ulleung Island 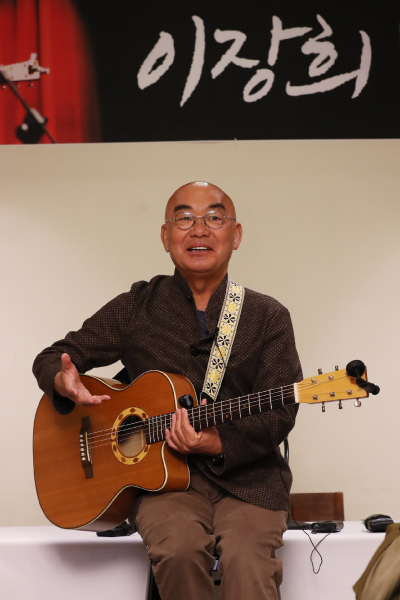 In the 1970s, singer and songwriter Lee Jang-hee was hugely popular along with other folk rock singers like Han Dae-soo, Song Chang-sik, Jo Young-nam and more. For young Koreans at the time, Lee was a symbol of freedom. He rode a motorcycle, wore a bright red jacket and grew a mustache.

But in 1975, the country went through the “purifying Korean pop music movement” under then-President Park Chung Hee who insisted that Korea should be more discriminatory in absorbing foreign cultural influences. Two blacklists containing names of 261 protest songs, folk ballads, rock and psychedelic music were issued, banning the sales and performances of the songs. The list included many of Lee’s hit songs. Perhaps that is why the free-spirited Lee decided to leave everything behind and immigrate to the United States the same year.

He started some businesses there, including establishing a radio station called Radio Korea. After the retirement, Lee’s initial plan was to live somewhere close to nature, like an island in Hawaii. But in 1996, during an unplanned trip to the small Ulleung Island in Korea, he instantly fell in love with the scenery and its people, purchased a small 100-year-old house and a large plot of land in front of it to make a home. After retiring from Radio Korea in 2004, Lee came back to the island with his dog Raco and settled down here, hoping to find peace and tranquility, isolated from people and noise. But that peace he wanted so much seems to have ended recently with the opening of new art center Ulleung Heaven in his front yard.

“I guess I couldn’t totally let go of my affection for music,” he said, explaining why he donated his vast front garden to the North Gyeongsang provincial government and established an art center there. “Although I found myself a home here for peace and quiet, I wanted to open it up to the public so music can resonate from Ulleung Island.”

To learn more about the art center and Lee, the Korea JoongAng Daily sat down with him for an interview at a small hideout looking out onto the East Sea near his home on Ulleung Island. The following are some edited excerpts from the interview.

Q. So many visitors are now coming to the art center and enjoying their time in your garden. Do you mind no longer having any privacy?

A. For the past 40 years, I’ve forgotten about how much I loved music. But with the opening of the art center, I’ve picked up my guitar again to rehearse for concerts with two of my best friends. We had two concerts already, and it’s been amazing. I have found my passion again and realized that this is what I’ve been living for. I got into a prestigious university but dropped out because I wanted to do music. I don’t have peace and quiet anymore but I gained so much more.

I have two things I love dearly, and they are music and nature. I coincidently visited the island and traveled around here by foot for about two weeks. I was just taken aback by its beautiful nature. I’ve always wanted to live on a beautiful island for the rest of my life after retirement so I thought about Hawaii, but that was before I realized that my home country also had such a beautiful island like this one. That is why I instantly purchased land and moved here. First, I used this vast front garden for farming, but I realized that I’m not a farming kind of a guy. So, I laid grass and used it as a garden. Whenever I wrote to my friends, I wrote, “From Ulleung Heaven.” That is why the art center is named that. I think this island called me here. It gave me back the passion for music that I had lost for so many years. Now, I sing and perform together with two of my best friends on an island I love so dearly. I have nothing more to ask for.