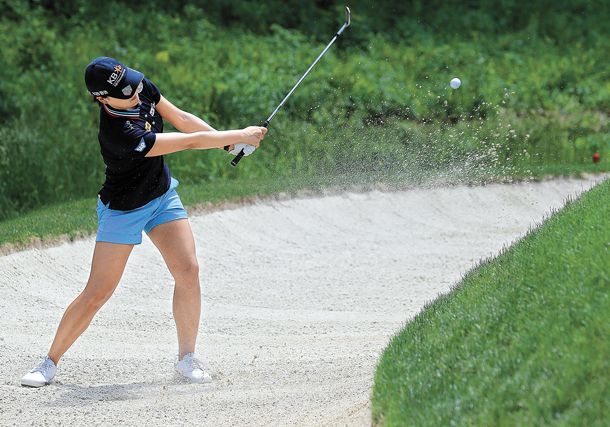 Chun In-gee hits a bunker shot during the final round of the Kingsmill Championship in Williamsburg, Virginia, on Sunday. [AP/YONHAP]

Chun In-gee walked away with another runner-up finish at the Kingsmill Championship in Virginia on Sunday, but her solid performance overall has given her some confidence ahead of the U.S. Women’s Open next week.

The 23-year-old Korean golfer started the final day as the sole leader, but she failed to maintain it, finishing the round three under par with a score of 69 and forcing the tournament into a playoff round.

On the first hole, she faced Nasa Hataoka of Japan and Ariya Jutanugarn of Thailand. Chun made par and was quickly eliminated after Hataoka and Jutanugarn made birdies, leaving them to fight for the title.

In the end, Jutanugarn came out on top with a birdie on the second playoff hole. Chun finished tied for second with Hataoka. It was Chun’s second straight runner-up finish at Kingsmill.

Although she hasn’t won a tournament in almost two years, her close finish was a confidence booster ahead of the second major tournament of the season.

“I didn’t make the birdie putt in the playoff, but I was happy to play great rounds,” Chun said. “The U.S. Open is the tournament that allowed me to achieve my longtime dream of playing on the LPGA Tour.”

Chun had five runner-up finishes last season, but she has been struggling more this year. Prior to Kingsmill, she had only one top-10 finish: tied for fifth at the Bank of Founders Cup in March.

When Chun joined the LPGA Tour in 2016, she had high prospects, having won the 2015 U.S. Women’s Open in her first appearance as a non-LPGA member. During her rookie season, she won another major, the 2016 Evian Championship, with a score of 21 under par, the lowest winning score in a major tournament for either men or women, and was named Rookie of the Year.

“Rather than feeling pressured, I’ll try to enjoy the tournament,” Chun said about the upcoming Women’s Open.