Items in raid may have been smuggled by Chos

Items in raid may have been smuggled by Chos 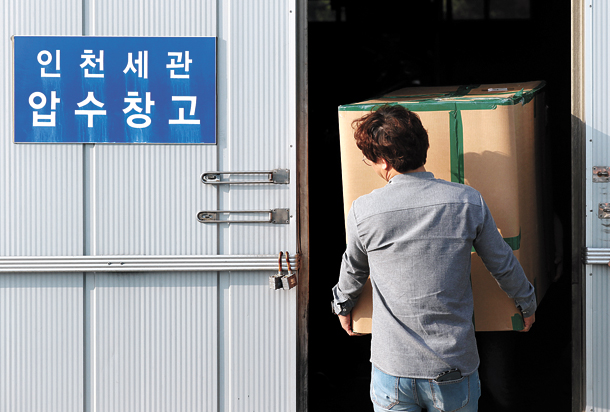 An employee of the customs office in Incheon moves a box of items believed to have been confiscated from Korean Air’s Cho family into a storage warehouse on Monday. [YONHAP]

The Korea Customs Service said on Monday that it found 2.5 tons of goods believed to have been smuggled by Korean Air’s owner family.

The agency sent about 30 officials to raid the offices of a Korean Air contractor in Goyang, Gyeonggi. About 20 to 30 boxes of goods were confiscated, but the Korea Customs Service did not disclose their contents.

It was the agency’s fifth raid on the family of Korean Air Chairman Cho Yang-ho and the fourth aimed at finding concrete evidence that the family brought in luxury goods from abroad without reporting them to customs. The previous raids, which involved Korean Air’s headquarters and Cho’s home, failed to unearth any material goods. Although Monday’s raid bore some fruit, it remains to see if the confiscated items from the contractor’s office were indeed smuggled.

“The lead for the raid came while analyzing Cho Hyun-ah’s phone calls,” a source at the customs agency said, referring to Cho’s eldest daughter.

Allegations that the company’s chairman and his family smuggled luxury goods into the country have been circulating since April. Korean law stipulates that anyone bringing an item worth more than $600 into the country must report it to customs. Many items that the Cho family was said to have smuggled are worth much more than $600. They include name-brand bags, furniture and art pieces.

Earlier this month, two whistle-blowers claimed to have helped the chairman’s two daughters, Cho Hyun-ah and Cho Hyun-min, smuggle goods into Korea about twice a week for the past nine years.

In a raid of the family’s home earlier this month, Kim Young-moon, head of the Korea Customs Service, said that agents found hidden spaces and clues to suggest they might have been used for smuggling, but they were unable to find any actual items.