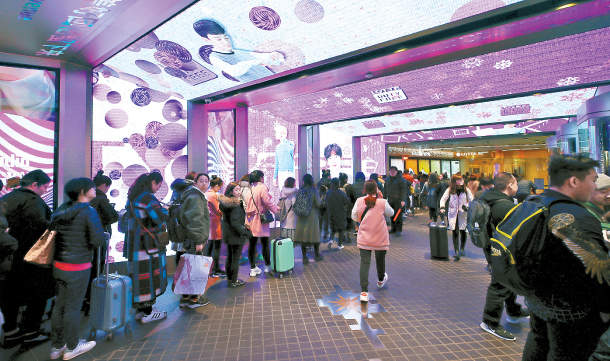 Lotte Duty Free in central Seoul is packed with tourists on a typical day in May. Many experts are urging the Korean tourism industry to diversify and stop relying so much on duty-free shopping. [YONHAP]

Korea’s tourism experts say there is a lot to learn from their neighbor’s success.

After coming back to power in 2012, Abe formed the Ministerial Council on the Promotion of Japan as a Tourism-Oriented Country, a reflection of his commitment to boost tourism and rejuvenate the struggling economy. Annual visitors in that year were only 8.4 million. 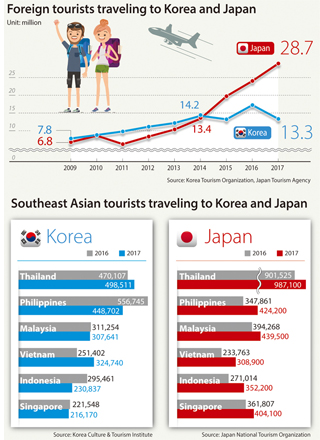 In 2015, Japanese officials set a goal to increase the number of foreign tourists to Japan to 40 million by 2020 in their first meeting of another council called the Council for the Development of a Tourism Vision to Support the Future of Japan.

Given the pace of growth in visitors, that figure is not a far-fetched dream.

The government’s dedication helped Japan reverse its tourism deficit for the first time in 53 years in 2015. Some 19.7 million international visitors came to Japan, more than doubling 2012’s figures, while 16.1 million Japanese traveled abroad.

That was the same year Japan attracted more foreigners than Korea for the first time in six years, a trend that Korea has yet to reverse.

Korean experts warn that Korea’s relative weakness in tourism is not simply caused by a Chinese ban on group tours as retaliation for the deployment of an American missile shield. And Japan’s strength cannot be attributed solely to the devaluation of the yen.

“Japan has long been accumulating resources for tourism even if it had been less active in advertising,” said Oh Ick-keun, a Keimyung University professor of tourism management. “The government understood the importance of the tourism industry.”

One thing the Japanese government decided on very early was to retain the uniqueness of Japan’s regional attractions, conserving local landscapes and regional economies. By not transforming every town and city into a generic metropolis, the government has welcomed overseas tourists to destinations beyond Tokyo.

Foreign travelers to Japan can choose from a wide range of destinations including Kyoto, Fukuoka, Hokkaido and Okinawa.

This is a big contrast to Korea, where 78 percent of foreign visitors only visit Seoul and 20 percent restrict their travels to Jeju Island.

“Japan, concerned about its local regional flavor diminishing, does not want huge franchises coming into the rural areas,” said Chae Hee-rak, who manages tourism marketing at the Suwon Cultural Foundation. “Because the characteristics and attractions of each region are different, tourists like to go to Japan several times to visit different places like Kyoto and Hokkaido.”

While tourists in Japan like to purchase goods that are unique to regions, visitors to Korea often head to large department stores and duty-free shops.

“Korea doesn’t have the capacity to diversity its regional products,” said Kim Jae-ho, a professor of tourism management at Inha Technical College, “and premium regional goods are sometimes so expensive that even Koreans can’t easily buy them.”

“This is the point where local governing bodies, the central government and related industries need to systematically work together to enable foreign tourists to purchase reasonably priced and unique goods in Korea,” he added.