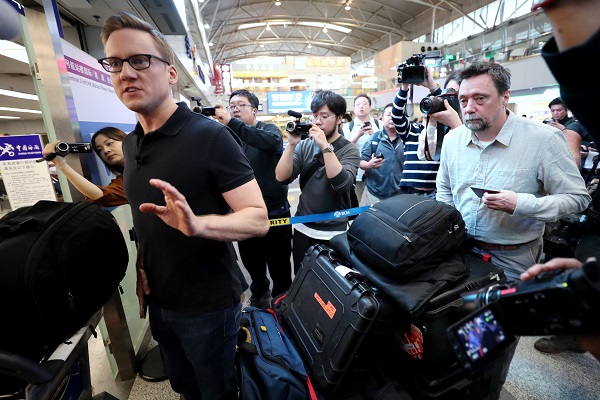 CNN’s Will Ripley, left, and foreign journalists prepare to board a plane to North Korea in Beijing Capital International Airport on Tuesday. North Korea did not allow South Korean journalists to cover the closure of nuclear test sites in Punggye-ri. [JOINT PRESS CORPS]

Foreign correspondents flew into North Korea Tuesday to witness the dismantling of the Punggye-ri nuclear test site but South Korean reporters weren’t among them after Pyongyang refused to let them in.

The South Korean government expressed “regret” that its journalists were not able to travel to the North, but noted that the dismantling of the nuclear test site was a step toward denuclearization.

Journalists from four countries — China, Russia, the United Kingdom and the United States — arrived in Wonsan on a direct chartered flight after departing from the Beijing Capital International Airport on North Korean flag carrier Air Koryo around 9:45 a.m.

The foreign correspondents will be lodged in Wonsan, a port city in North Korea’s eastern Kangwon Province, after being invited by Pyongyang for the on-site coverage of the dismantlement of its Punggye-ri nuclear test site in North Hamgyong Province between Wednesday and Friday.

A Unification Ministry official said Tuesday that after failing the previous day, it again tried to transmit the South’s list of journalists through its Panmunjom communication channel at the inter-Korean border village at 9 a.m. but the North declined to accept it.

The group of South Korean journalists flew into Beijing on Monday, on standby despite Pyongyang not having accepted the list of South Korean reporters to cover the Punggye-ri event.

“Realistically, it seems difficult for the South Korean journalists to enter [North Korea] via Beijing today,” said the official.

Unification Minister Cho Myoung-gyon said in a statement, “Our government thinks it is regrettable and unfortunate that our press corps was not able to visit North Korea because there were no follow-up measures despite the North inviting our journalists to the Punggye-ri nuclear test site dismantlement ceremony scheduled to be held between May 23 and 25.”

He went on to emphasize that the core of the Panmunjom Declaration signed at the inter-Korean summit between President Moon Jae-in and North Korean Kim Jon-un on April 27 was to end past confrontation and start a new era of national reconciliation, peace and prosperity.

“Nonetheless, we note that the dismantlement of the Punggye-ri nuclear test site, a measure toward denuclearization that has been promised by the North, is proceeding as planned,” said Cho, “and we look forward to the North-U.S. summit to be held successfully through North Korea’s action.”

Cho said that Seoul “looks forward to the North taking substantive measures toward the complete denuclearization of the Korean Peninsula permanent establishment of peace,” adding that the South Korean government will continue to closely cooperate with the North and the United States.

The four countries invited by the North to send correspondents are four of the five permanent members of the United Nations Security Council, which also includes France.

The reporters that flew into Wonsan to cover the event were from the United States’ CNN and CBS, the U.K.’s APTN and Sky News, China’s CCTV and Xinhua News Agency and Russia’s RT and RIA Novosti.
South Korea had intended to send eight reporters from broadcaster MBC and news agency News1.

The other foreign journalists were issued visas Monday, but Seoul reporters were left in the dark.
South Korean government officials discouraged its reporters from approaching the North Korean Embassy in Beijing to clarify the visa issuance issue, adding that this could annoy the North, and said they were communicating with North Korea through the Panmunjom channel. Reporters were also dissuaded from speaking to North Korean embassy officials or guards.

The South Korean journalists went to the Beijing airport but were not allowed to board the North’s chartered flight to Wonsan. They decided to return to Seoul.

The South’s Unification Ministry said in the afternoon that the Panmunjom communication channel with the North closed for the day at 4:00 p.m. without any significant communication.

“We’re going to go in there with our eyes wide open, and we’ll see what happens,” said Will Ripley, a correspondent for CNN who is traveling to the North for the 18th time, before departing for Wonsan. “We hope that the North Koreans are going to be transparent like they say they are and they are going to show us the nuclear test site and the dismantlement.”

Foreign journalists covering the event said that they did not have to pay a hefty fee of $10,000 per visa on top of flight fees, as earlier reported.

They indicated that they paid around $160 and that the expenses were similar to any other business trip. Visa fees to North Korea were around $160 in the past for American citizens. The foreign reporters will later head north to the Punggye-ri test site by train. Despite North Korea’s recent harsh tone, its invitation to the foreign journalists and dismantling of the nuclear site appears to signal an intention to go along with the North-U.S. summit on June 12 in Singapore.

But the North’s snubbing of South Korea’s media indicates it plans to keep up the pressure heading into the summit between leader Kim Jong-un and U.S. President Donald Trump.

The North’s snubbing of South Korean journalists also comes ahead of President Moon Jae-in’s summit with U.S. President Trump on Tuesday in Washington.

Depending on the results of the Moon-Trump summit, and the determining of the exact date of the dismantlement ceremony, which the North said could be dependent on weather conditions, some Seoul officials pointed out that South Korean journalists still may have an opportunity to arrive in the North through a different means, such as via the Kaesong Industrial Complex.

The North’s official Rodong Sinmun in an English editorial on Tuesday continued it criticism of the United States for its “red herring” tricks to “bring down those countries incurring its displeasure.”

It accused the United States of trying in the past to “militarily occupy the whole of Korea by mobilizing the huge aggression forces,” including its ground forces, Air Force and Pacific Fleet, and South Korean and Japanese forces. It also claimed any issue about human rights abuses in North Korea was “non-existent.”

North Korea has been seeking a guarantee of its regime’s survival, but late Libyan leader Muammar Gaddafi fell from power and faced death at the hands of rebels in 2011 eight years after he signed a denuclearization agreement in 2003.

This has been seen by North Korean leaders as a reason to hold onto their nuclear weapons to ensure regime survival.
The White House has continued to distance itself from U.S. National Security Adviser John Bolton’s call for a Libyan approach to North Korea denuclearization.

U.S. Vice President Mike Pence told Fox News on Monday, “There was some talk about the Libyan model last week, and you know, as the president made clear, this will only end like the Libyan model ended, if Kim Jong-un doesn’t make a deal.”

But he also warned that it would “be a great mistake for Kim Jong-un to think he could play” Trump, and that the president is willing to walk away from talks.

However, Pence underscored, “We really hope that Kim Jong-un will seize the opportunity to dismantle his nuclear weapons program, and do so by peaceable means.”