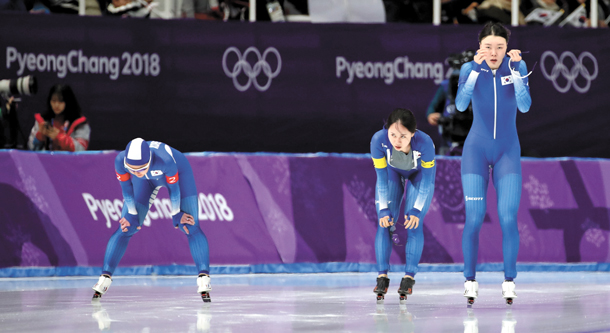 From left, Kim Bo-reum, Park Ji-woo and Noh Seon-yeong cool down after the team pursuit race during the PyeongChang Olympics at Gangneung Oval in Gangwon on Feb. 21.[YONHAP]

After a month-long investigation of the Korea Skating Union (KSU), the Sports Ministry announced on Wednesday that former Vice Chairman Jeon Myung-gyu maintained an undue level of influence at the skating governing body even when he didn’t work there, negatively using his authority to control major decisions. 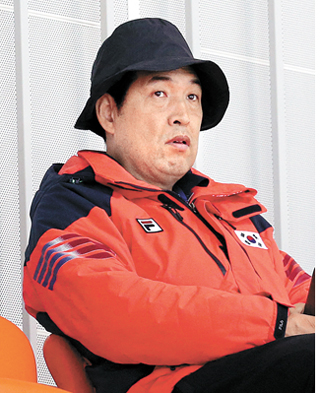 The Korean skating teams - both short-track and long-track - had a successful Olympics, winning a total of 13 medals, but the results were mired by controversies involving the KSU.

Prior to the start of the Games, short-track star Shim Suk-hee was assaulted by her coach during a training session. The KSU was also reported to have mistreated Noh, making a mistake that saw her excluded from the national team just two weeks before the Games and then added again with a just a few days to go.

The bullying accusations during the women’s team pursuit race only added to the KSU’s woes. The possible bullying of Noh raised questions over Jeon showing favoritism toward certain players, and Lee Seung-hoon taking gold in the mass start race after his teammate sacrificed his own lead only compounded the criticism.

Following the Olympics, fans petitioned the Blue House, leading to the Ministry of Culture, Sports and Tourism and the Korea Sport & Olympic Committee (KSOC) to open an investigation into Jeon and the KSU.

The investigation was held from March 26 to April 30.

In the women’s team pursuit race, the final time is recorded based on the time the last racer crosses the finish line. While teamwork is the most important factor in the event, the Korean women’s team showed little sign of working together, as Kim and Park finished more than three seconds ahead of Noh. After the race, fans accused Kim and Park of bullying Noh. The government investigation found no evidence of bullying, instead reporting that the incident occurred due to a lack of communication among the team before the race.

“They believed the ends justified the means, and they didn’t think breaking rules was anything serious,” Roh Tae-kang, vice sports minister, was quoted as saying on Yonhap. “We’ll remind the KSU once again the importance of processes and rules. In the world of sports, results have long been the top priority. But medals won without proper processes or protection of human rights will no longer be celebrated by the people.”

Aside from his involvement in the KSU in general, Jeon was found to have used his authority to preferentially train athletes who attended Korea National Sports University.

“The management and care of other athletes was poor,” the ministry was quoted as saying. “Jeon was involved in separate training schemes and inappropriate methods of coaching.”

When short-track speed skating was first selected as an Olympic test event in 1987, Jeon was appointed as the head coach of the Korean national short-track team and took the helm for 15 years. Throughout his career, Jeon developed the Korean team into a short-track powerhouse, and it won 11 golds, three silvers and four bronze at the Olympics between 1988 and 2002.

Despite his success, Jeon’s results-based approach and favoritism started to receive criticism in the mid-2000s, as fans began to pay more attention to athlete’s efforts and not just the awards they took home.

In 2010, Jeon stepped down from his position due to a match-fixing scandal. He returned shortly after, but once again had to resign after the 2014 Sochi Olympics due to conflict between athletes that trained at Korea National Sport University and those that didn’t. Jeon was once again reinstated last year in a last-minute attempt to ensure the Olympics was a success.