A new generation of chaebol leaders takes over

A new generation of chaebol leaders takes over 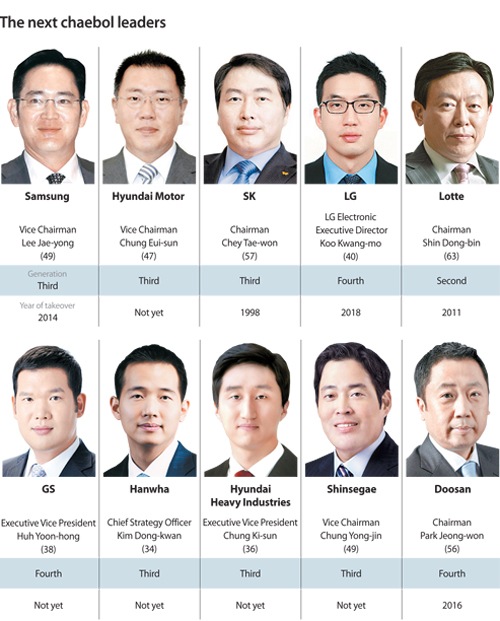 LG is facing a generational shift.

Korea’s fourth-largest conglomerate announced that its fourth leader will be Koo Kwang-mo, a 40-year-old LG Electronics executive and the adopted son of late Chairman Koo Bon-moo.

It is unclear exactly when Koo Kwang-mo, who joined the conglomerate in 2006 and is now an executive director at LG Electronics, will take the chairmanship post.

Six vice chairmen, including his uncle and professional managers, are expected to help Koo settle into his new role.

Koo, who has an MBA from Stanford University in California, is part of the new wave of fourth-generation leaders at major Korean conglomerates.

In other advanced economies, professional managers gradually take control of businesses and family leadership fades. In Korea, however, management control is still linked to the family tree.

Even though Samsung hasn’t yet promoted Lee Jae-yong to chairman, the Fair Trade Commission named him the top management decision maker at Samsung, recognizing him as the conglomerate’s de facto leader.

The country’s No. 2 chaebol, Hyundai Motor, is still led by Chairman Chung Mong-koo, 80, but he’s been keeping a low profile lately. His most recent public appearance was at a 2016 parliamentary hearing into the scandal that brought down former President Park Geun-hye. His 47-year-old son Chung Eui-sun has been playing the role of de facto chairman, as he was promoted to vice chairman of the automaker from CEO of Kia Motors in August 2009.

Chey Tae-won, the chairman of SK, Korea’s third-largest conglomerate, was just 37 when he took over control of the company after his father’s death in 1998.

His father, Chey Jong-hyon, was SK’s second leader, after his older brother Chey Jong-kun. Chey Tae-won was even younger than LG’s Koo, and he used bold and innovative management tactics to see the company through the Asian financial crisis and revamped SK’s focus, from textiles to other business.

The youngest leader in chaebol history was Hanwha Chairman Kim Seung-youn. He became chairman at age 29, just four years after joining the company, after his father, founder Kim Chong-hee, died in 1981. Kim, 66, has been at the helm of Hanwha for 37 years, and is the longest-serving chairman of any leading conglomerate in Korea.

LG, which was founded in 1931, is the second-oldest of the top 10 chaebol by assets, according to Fair Trade Commission antitrust regulator.

Doosan, the 10th-largest, was the first to have the great-grandson of the founder run the business. It is the oldest chaebol in Korea, and was established in 1896 under the Joseon Dynasty.

Current Doosan Chairman Park Jeong-won, then 54 years old, took over from his uncle Park Yong-maan, the incumbent chairman of the Korea Chamber of Commerce and Industry, in 2016.

Conglomerate chairmen in their 60s, such as GS’ Huh Chang-soo, Hanwha’s Kim Seung-youn and Hyundai Heavy Industries’ Chung Mong-joon, have chosen their sons in their 30s as heirs. They are set to become third-generation leaders if all goes smoothly.

Huh Yoon-hong is the first son of the chairman and executive vice president of GS E&C, the construction arm of the country’s sixth-largest conglomerate. The 38-year-old has worked for GS E&C for more than nine years.

Kim Dong-kwan, 34, is already the chief operating officer of Hanwha Q Cells, the conglomerate’s solar energy company, and has worked for the group for eight years. He is oldest of three sons.

However, it will be very challenging for third- or fourth-generation chaebol leaders to lead businesses to success, according to experts.

Lotte Chairman Shin Dong-bin doesn’t have many options to pass his title on to. None of his sons and only two of his daughters work at Lotte or live in Korea.