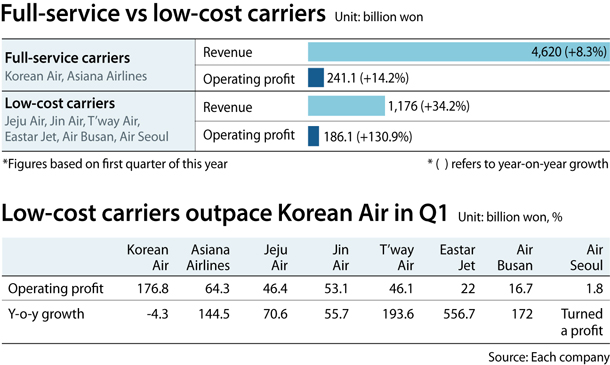 Budget airlines flew high in the first quarter, with combined operating profits soaring to more than double the figure inked in the same quarter last year.

LCCs typically release a tentative earnings report before releasing their fixed figure as they do not vary much.

The largest growth booster was the rapidly increasing demand for both international and domestic travel.

According to data from the Ministry of Land, Infrastructure and Transport released last month, the number of passengers that traveled through Korean airports reached 9.58 million in March, increasing by 12.6 percent year-on-year. While March is not traditionally a high-season for international travel, the number of overseas travelers increased by 17 percent to 7.1 million in the same month, showing traveling is becoming a year-round event.

Airlines are still in the process of expanding their travel routes. Eastar Jet will introduce a service to Da Nang, Vietnam, in June and Sapporo, Japan, in July. By the second half of the year, it will also start services to Kyushu and Nagoya in Japan.

T’way Air diversified its routes by creating flight services that depart from various regional airports in Korea including Daegu, Busan and Jeju.

Korea’s largest airline said one-time incentive payouts to employees, of about 53.4 billion won, and losses from unfavorable currency rates ate up its operating profit. Though the owner family scandal has tainted the airline’s brand image, it wasn’t until April that the “water rage” scandal involving Korean Air heiress Cho Hyun-min broke. Any effect from resultant boycotts will show in second quarter reports.

Revenue growth of the two full service carriers was limited to 8.3 percent. The total earnings of 4.62 trillion won, however, remains an unbeatable sum for the six budget airlines combined.

Full service carriers are trying to survive through a fierce battle in the aviation market by bolstering their long-haul flight services. According to a spokesperson from Asiana Airlines, it will make 60 percent of its services long-haul flights by 2022.