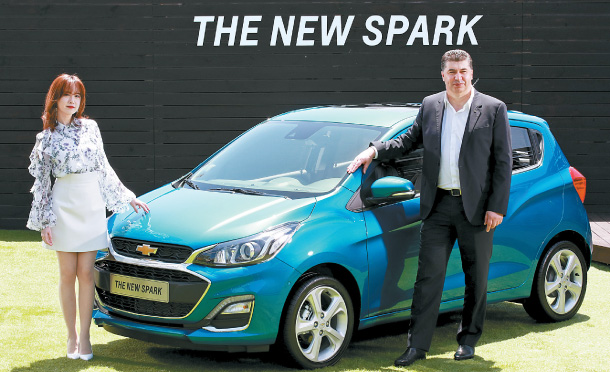 “Chevrolet is a global brand. We have a very diverse portfolio. We will make sure that customers in Korea will have access to Chevy models brought from around the world,” GM Korea President and Chief Executive Kaher Kazem said in a showcase for the face-lifted Spark.

The upgraded Spark will go on sale next month in Korea after it is produced at the Changwon plant, 400 kilometers (248 miles) south of Seoul, for local and international markets.

To select the right Chevrolet models for the Korean market, GM Korea conducted a consumer survey from May 8 to 20. The six models posted on the Chevrolet webpage were the Equinox, Traverse, Tahoe and Suburban sport utility vehicles and the Corvette sports car and Colorado pickup.

The company didn’t provide the survey results as the poll was for its own reference.

The Equinox SUV will be displayed at the Busan motor show next month and is expected to hit dealerships within this year, the CEO said, adding that the introduction of Chevy cars fully depends on domestic demand.

As the demand for SUVs has been on the rise in global markets, carmakers have beefed up their lineups with SUV models in recent years.

The New Spark is the first model of 15 new and upgraded vehicles GM vowed to launch in the Korean market in the next five years as part of its commitment to bolster its operations in Asia’s fourth-largest economy.

“We start today with the Chevrolet Spark to open a new chapter together in Korea. The Spark is an extremely important vehicle not only for domestic customers but also for international customers,” Kazem said.

The Spark is available in 48 markets and is the best-selling mini car in the United States, with sales of 176,627 units in the six years through 2017, the company said.

The 1.0-liter gasoline model with a manual transmission sells at the starting price of 9.8 million won ($9,100), and prices go up to 13 million won depending on options. The price for the Spark with an automatic transmission is higher than the manual model by 1.8 million won, it said.

GM and the state-run Korea Development Bank (KDB), the two biggest shareholders in GM Korea, recently signed the binding agreement that will permit a combined 7.7 trillion-won lifeline - 6.9 trillion won from GM and 810 billion won from the KDB - to keep the loss-making Korean unit afloat.

Under the deal, the Detroit carmaker is banned from selling any of its stake in GM Korea before 2023 and is required to keep its holding in the unit above 35 percent until 2028.

In February, GM announced its plan to shut down one of its four car assembly plants in Korea by May and asked the KDB to extend a financial helping hand to GM Korea. The Korean unit has continued to post net losses worth an accumulated 3.134 trillion won over the past four years through 2017 due to lower demand for its models.