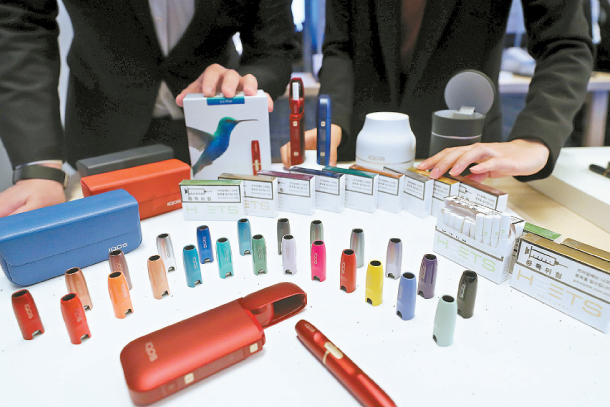 In its first year on the market, the heat-not-burn cigarette IQOS sold 1.9 million devices and became one of the top five cigarette brands in the country, Philip Morris Korea said Wednesday.

“In a market in which consumers have high brand loyalty, it’s very difficult for new brands to take even a 1 percent share, not to mention that IQOS was a product that had to be used in a completely different way.”

According to the company and Hankook Research, IQOS now ranks within the top five brands in the local tobacco market, where domestic brands by KT&G like Esse hold a 60 percent share.

IQOS was the first among three heat-not-burn cigarettes to launch in the country. British American Tobacco’s glo and KT&G’s lil entered the market later last year.

Korea is the second largest market for IQOS behind Japan, where sales started in 2015. It will also be the home to the first Asian facility to make IQOS’ Heets refills, which are currently imported from Italy. The facility is under construction and will start mass production this year.

“A local production facility we operated since 2002 [for regular cigarettes] has a good reputation for product quality,” said Chong. “And Korea is recognized as a fairly advanced country so it’s reasonable to build a factory for high-value products here because IQOS requires advanced [technological and safety verification] systems.”

After IQOS introduced the heat-not-burn cigarettes last May, there has been debate on the product’s safety. Philip Morris asserts that IQOS produces 90 percent fewer toxic substances than combustible cigarettes and zero tar. Toxic elements in cigarettes are produced in the combustion process, it says, whereas IQOS slowly steams its tobacco at a lower temperature.

Researchers worldwide have agreed that heat-not-burn cigarettes are less harmful than conventional cigarettes. But their effects on the human body over time aren’t known.

Heat-not-burn cigarettes are now being targeted by the government.

Last Monday, the Ministry of Health and Welfare announced it would add new pictorial warnings on heat-not-burn cigarette refills starting in December. The warnings imply that the products are related to cancer. The text warnings currently on refills read, “Electronic cigarettes incur nicotine addiction.”

Nikolaus Ricketts, Philip Morris Korea’s director of reduced risk products, said that although the company does not have an issue with warnings, ones with frightening pictures can be “very misleading” and might encourage smokers to continue smoking regular cigarettes, figuring the health risks are the same.

“The current approach seems to be aimed at eradicating every type of cigarette,” said Chong. “The best situation would be people not smoking at all, but for those that find it difficult, it’s better to find them a less harmful alternative. This is a direction for smoking policy in a lot of countries but the pictorial warning I believe reverses this movement.”