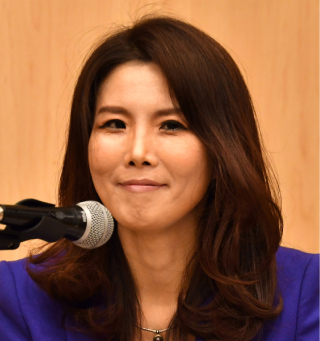 Kang Eun-kyung, newly appointed CEO of the Seoul Philharmonic Orchestra, talks to the press for the first time since her appointment in March. [SEOUL PHILHARMONIC ORCHESTRA]

The Seoul Philharmonic Orchestra’s newly appointed CEO Kang Eun-kyung held a press conference Wednesday at the Sejong Center for the Performing Arts in central Seoul, the first since her appointment in March, and revealed some of her plans for her three-year term.

One of her biggest challenges is working with the Seoul Metropolitan Government and the city council to quickly appoint a new artistic director to wield the baton that was surrendered by maestro Chung Myung-whun in December 2015.

“Six candidates have been selected, and after scrutinizing and adjusting contract conditions, we’ll try to appoint one as soon as possible to a seat that has been vacant for so long,” said Kang.

Chung left the orchestra after various scandals related to the running of the orchestra, his salary as well as his poor relationship with former CEO Park Hyun-jung.

To make up for the vacancy, the city-run orchestra adopted a resident and guest conductor system and appointed maestros Markus Stenz as the conductor-in-residence and Thierry Fischer as the principal guest conductor in September 2016.

The orchestra was planning to appoint a new artistic director by the end of last year. But when previous CEO Choe Heung-sik was appointed governor of the Financial Supervisory Service last September, he had to leave the orchestra and the appointment was delayed.

Currently, many positions at the orchestra are vacant. Aside from than the artistic director’s position, the orchestra needs to find an assistant conductor, resident composer as well as an advisory position for concert planning.

“I hope to settle things down and find adequate leaders to run the orchestra within this year,” said Kang.

Kang said she’ll add another conductor position, an associate conductor, so the orchestra won’t have to scramble for maestros at the last minute in times of crisis, which happened quite often over the past few years.

The orchestra will also go on a grand tour of Europe in November, its first in four years. It will tour six cities in three countries including Switzerland, Italy and France with maestro Fischer and pianist Kim Sun-wook.

“The upcoming tour is quite meaningful as we will be retargeting the European market once again after four years of turmoil,” said Kang, adding that she plans to form connections with prestigious orchestras in Europe and the United States to give the orchestra more overseas opportunities while benchmarking management strategies she finds relevant to Seoul.

“The goal for the Seoul Philharmonic Orchestra for the upcoming years is to create a sustainable orchestra in the 21st century that harmoniously realizes both artistic and public demands,” said Kang.

Soon after she was appointed CEO, Kang held one-on-one meetings with each member of the orchestra to listen to their needs.

“Every one of them had at least one request they wanted to make,” she said, “and I will try to make it happen.”

One request that came from many orchestra members, said Kang, was the need to construct a concert hall for classical music for the orchestra.

“I can’t fulfill that right away, but I do agree with the members,” said Kang. “I will continue to call for that and hope to establish a concert hall in central Seoul and make it a landmark for all classical music aficionados.”