‘The North’s devastated forests leave it vulnerable to disaster’

‘The North’s devastated forests leave it vulnerable to disaster’ 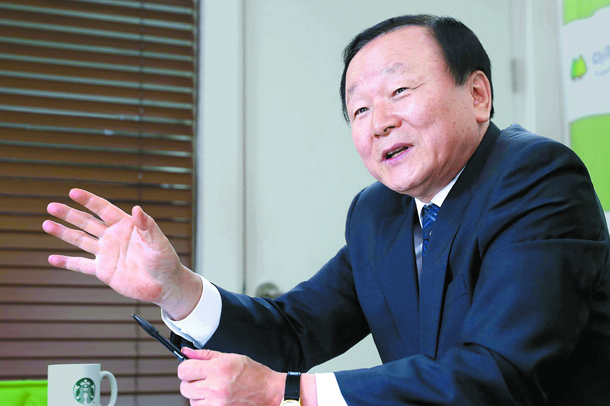 After the historic summit meeting between the two Koreas last month, the first inter-Korean cooperation project pursued by the government is replanting trees on the bare mountains of the North.

South Korea’s Blue House decided to form a task force team dedicated to expanding forestation cooperation with the North early this month during a meeting set up to discuss on how to execute the goals, announced Panmunjom.

“As planting trees is itself a humanitarian activity, it isn’t against the United Nations’ sanctions against the North,” the Blue House said.
South Korea developed expertise in greening forests during the ’70s. Now, the government hopes to deliver its know-how to the North, as well.

The JoongAng Ilbo sat down with Jung Kwang-soo, 65, a standing representative of Green Asia Organization, a private organization dedicated to the Green Korea Project, to discuss effective ways to cooperate with the North to green the Korean Peninsula.

Before taking his seat at the organization in December last year, Jung worked for the Korea Forest Service for over 30 years after receiving master’s and doctoral degrees in forest resources at Seoul National University. From January 2009 though February 2011, he was the minister of the country’s forestry agency.

Below is the excerpt of the interview.

Q. Will the first inter-Korean cooperation project will be forestation?

A. Forestation can only be the first project. The project is immune to controversy, and it’s a nonpolitical, nonmilitary business. The cooperation is also crucial for North Korea. Seoul already has the experience and know-how built through the government-led forestation plan in the 1970s. Currently South Korea is already passing on its know-how to 13 countries, including China and Mongolia, and obviously, we should also support North Korea.


Will the private sector be a part of the newly established task force team?

From what I know, the Korea Forest Service has formed its own task force consisting of roughly 10 members. If this task force is the one the Blue House is referring to, there is a problem. As devastated forests in the North is linked with economic difficulties there, such as lack of fuel and food, the issue needs to be approached with a diverse perspective. If the members of the task force are all from the country’s forestation authority, only a limited approach will be possible. To come up with a balanced cooperation plan for forestation, the task force must include members from the private sector as well as different government ministries.


Is practical cooperation with the North possible while it’s still under UN sanctions?

Cooperation in forestry has its own unique characteristics. The North’s forests are devastated, and this leaves the country vulnerable to natural disasters like flood, drought and landslide. Behind the deaths of hundreds of thousands of people during the North Korean famine in the 1990s, known as the Arduous March, was forest denudation.

The world is putting efforts into tackling climate change, and forests are the only carbon sink recognized by the UN. So reforestation in the North is kind of a win-win business for all. It is a way to slow global warming and protect the lives of people there.


How serious is the forest denudation in the North?


What are the North’s efforts on reforestation?

North Korean leader Kim Jong-un is actually directly administering [reforestation projects.] In April 2012, Kim ordered the country officials to cover all the bare forests in green within the next 10 years. In April 2014, he demanded that all party members, the military and the public engage in a desperate movement for reforestation. Currently, the country is under a 10-year (2014-23) reforestation plan that is attempting to plant 6.5 billion trees in 1.68 million hectares of bare forests.


It doesn’t seem like the plan is going very well.

It is important to plant trees, but it’s more important to look after them. Planted trees live less than a year before they are taken down to be used for fuel in the North. Several conditions need to be met for the forestation to work. Enough seeding must be secured. They need to be planted and looked after under a planned afforestation project. The project needs be linked with residents benefits and ultimately solve the people’s problem with fuel. But I think the country is having trouble attracting people’s participation.


Do the leadership and passion of those taking charge of forestation projects play a crucial role?

In the South, there are three people who led forestation to success. Late President Park Chung Hee, who ordered the forestation, former Prime Minister Goh Kun, 81, who designed the first 10-year forestation plan and former Forest Service Minister Sohn Soo-ik, 87. The president supported plans that were crafted and supervised by Goh. Sohn actually put the plans into action and focused on the project with intense tenacity and achieved goals four years faster than expected.

Sohn, then, [tried to prove himself] as he was appointed minister in a demotion from his former position as Gyeonggi governor. If the North’s Kim wants to rid of devastated mountains he needs figures like Goh and Sohn. But I don’t know who is leading forestation there.


How should the two Koreas cooperate in restoring forests?

The leader of the forest restoration projects should always be the North, and the South should only be supporters of the projects. To maintain that relationship, there are five things we need to consider. We should take forestation in gradual steps, starting from areas that the North is willing to accept.

The projects must be developed into a comprehensive and long-term inter-Korean affair and not be fragmentary and short-term. Balanced role allocation between the government and private sector and the South and North are necessary. There also needs to be a big picture that is able to show the link between cultivating trees and increased fuel and food. It is important to find successful cases and apply the model from the beginning to the end, region by region. To pursue the plan effectively, it is necessary to form a committee involving representatives from both Koreas.