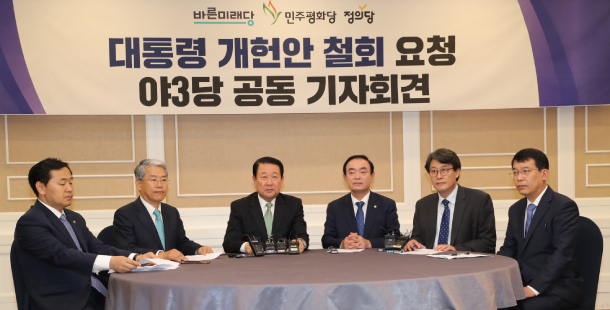 The National Assembly has until today to vote on President Moon Jae-in’s constitutional reform bill, which would introduce a presidential system similar to one in the United States, but political parties failed to reach common ground on Wednesday, stoking concerns that lawmakers might miss the deadline.

Moon’s Democratic Party urged other parties on Wednesday to appear for the vote today, but the opposition bloc, including the left-leaning Justice Party, refused to do so. They argued that more time was needed to hear opinions from the public and accused the Blue House of ignoring this part of the process.

The impasse came just days after the legislature ended weeks of gridlock over another bill. On Monday, the National Assembly passed a bill mandating an independent counsel probe into an online opinion manipulation campaign linked to the Democratic Party. The main opposition Liberty Korea Party had boycotted all sessions until the bill was passed.

At stake now is Moon’s effort to amend the Constitution and overhaul the presidential system. On March 26, Moon’s office submitted a bill to the National Assembly that would, among other things, make presidential terms four years and allow the incumbent to seek re-election. Korean presidents currently serve single five-year terms with no option for re-election.

Moon argued that the amendment would allow presidential and local elections to take place at the same time every four years, saving taxpayer money. He gave the National Assembly 60 days to review the bill and said he was willing to retract it if the National Assembly could agree on its own bill.

A constitutional amendment can be proposed by the president or a majority of the National Assembly. The bill must be made public for at least 20 days, and the National Assembly must vote on the amendment within 60 days of the public announcement. Passage requires two-thirds or more support by the legislature. Afterward, a national referendum must take place within 30 days. A majority vote finalizes the amendment and the changes take effect immediately.

Of the 288-member National Assembly, only 118 are affiliated with the Democratic Party, far short of the 192 votes needed for Moon’s bill to pass.

On Wednesday, the Democratic Party’s floor leader, Hong Young-pyo, urged others to participate in today’s vote. He called not doing so “a show of disrespect” to the Constitution.

His counterpart in the Liberty Korea Party, Kim Sung-tae, requested that Moon retract his bill, saying the Democratic Party would blame the opposition for bypassing the vote if he didn’t. He said the legislature would come up with its own bill by June 30, when a special multi-partisan committee on constitutional reform is set to disband.

In a joint news conference, the Justice Party, Bareunmirae Party and Party for Democracy and Peace said they shared Moon’s “desperate” will to carry out constitutional reform but asked that he withdraw his bill.

The Blue House said on Wednesday that it has no intention of retracting Moon’s bill.