North Korea threatens to pull plug on summit with U.S. for second time

North Korea threatens to pull plug on summit with U.S. for second time 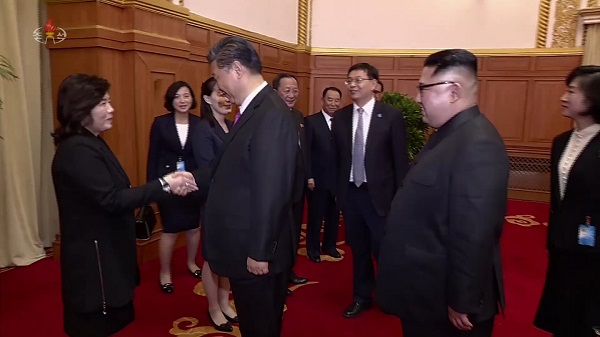 Pyongyang threatened to pull out of its planned summit with Washington on Thursday for the second time in two weeks, accusing the United States of offending its “goodwill” by saying North Korea could end up like Libya if it doesn’t denuclearize.

North Korea’s state-run Korean Central News Agency (KCNA) quoted Vice Foreign Affairs Minister Choe Son-hui as saying that she couldn’t suppress “surprise at such ignorant and stupid remarks” made by U.S. Vice President Mike Pence, who told Fox News on Monday that the North might end up like Libya if North Korean leader Kim Jong-un refused to make a deal on giving up his nuclear arsenal.

Pyongyang sees Libya’s nuclear disarmament as the direct cause of the downfall of Col. Muammar Gaddafi and his death by rebel forces during the Arab Spring uprisings in 2011, eight years after his denuclearization deal was signed.

After the North made its first threat last week to cancel the summit with the U.S., slated for June 12 in Singapore, Trump said he didn’t have the Libya model in mind for North Korea’s denuclearization, stressing Kim Jong-un would be given “a lot” of security guarantees.

“In case the U.S. offends against our goodwill and clings to unlawful and outrageous acts,” Choe was quoted as saying in an English version of the KCNA report, “I will put forward a suggestion to our supreme leadership for reconsidering the DPRK-U.S. summit,” referring to the North by the initials of its official name, the Democratic People’s Republic of Korea.

Before her promotion to vice foreign minister early this year, Choe served as director general of the North American Department within the North’s Foreign Ministry and led numerous delegations from her country to meetings with retired U.S. officials in so-called Track 1.5, or semi-governmental, semi-private discussions.

Choe specifically took issue with Pence’s remarks that Pyongyang might end up like Libya, that a military option was never off the table in dealing with the North, and that the regime must carry out complete, verifiable and irreversible denuclearization, also known as CVID.

What a “political dummy” Pence is, Choe said, “to compare the DPRK, a nuclear weapon state, to Libya that had simply installed a few items of equipment and fiddled around with them.” In order not to end up like Libya, the North “paid a heavy price to build up our powerful and reliable strength that can defend ourselves and safeguard peace and security in the Korean peninsula and the region,” she continued.

At one point, the vice foreign minister said her country could “make the U.S. taste an appalling tragedy it has never experienced nor even imagined up to now.”

North Korea “will neither beg the U.S. for dialogue nor take the trouble to persuade them” to hold the June 12 summit, said Choe, adding it’s up to Washington whether the summit will be held or the two countries kick off a “nuclear-to-nuclear showdown.”

Trump, who suggested during a meeting with South Korean President Moon Jae-in that the summit with North Korea could be postponed if certain conditions weren’t met, told reporters on Wednesday in Washington that he’d know next week if the meeting with Kim Jong-un would take place as scheduled, without explaining further.

White House aides are preparing to travel to Singapore this weekend for a crucial meeting with North Korean officials to discuss an agenda and logistics for the summit, Reuters reported, citing U.S. officials who spoke on the condition of anonymity. The U.S. delegation reportedly includes Joseph Hagin, White House deputy chief of staff, and Mira Ricardel, deputy national security adviser.