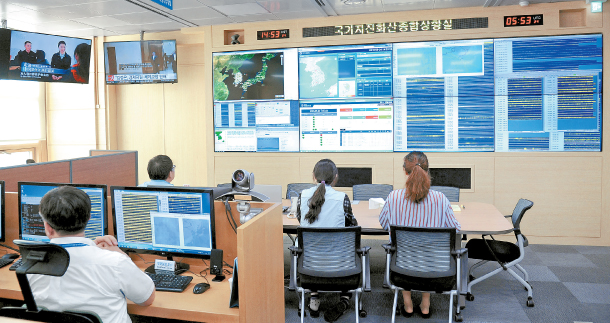 Officials from the South’s Korea Meteorological Administration monitor screens for seismic activity and signals of demolition of the North Korean Punggye-ri nuclear test site on Thursday afternoon in the agency’s situation room in Dongjak District, southern Seoul. The blowing up of tunnels was confirmed Thursday evening. [YONHAP]

North Korea dismantled its Punggye-ri nuclear test site in the presence of correspondents from five countries on Thursday.

Explosions in tunnels took place between 11 a.m. to 4:17 p.m. as reporters from South Korea, China, Russia, the United States and the United Kingdom looked on, according to a pool report.

The journalists took a train, bus and hiked to North Korea’s northern nuclear test site on Wednesday night and Thursday morning from the port city of Wonsan, more than 400 kilometers (250 miles) away. The reporters were invited by Pyongyang to watch the dismantlement at a safe distance.

The North said the international reporters would be allowed to transmit articles and footage only after returning to Wonsan, in North Korea’s southeastern Kangwon Province, where a temporary press center was set up - meaning their coverage would have a time lag of some 20 hours.

As of press time Thursday, no reports were officially made by North Korea’s state-run media on the demolition.

A South Korean official who spoke on the condition of anonymity said Seoul expected Pyongyang to carry out the demolition before Thursday night because Punggye-ri was expecting rain after sunset.

On May 12, when announcing its plan to scrap the Punggye-ri complex, North Korea said a dismantling ceremony would be held between Wednesday and Friday depending on weather conditions. The following procedures were promised: all tunnels on the test grounds will be collapsed by an explosion; entrances to the tunnels will be blocked; all observation facilities will be removed; and all research institutes and guard towers will be removed. Guards and researchers will be withdrawn and the area surrounding the test grounds will be “completely closed,” the North said through its official mouthpiece, the Korean Central News Agency.

Another South Korean government official said Seoul might know about the demolishing immediately because the North said it would tear down the Punggye-ri test site with an explosion, which could produce seismic waves. Local authorities did not confirm as of press time whether any signs were detected.

Woo Nam-cheol, an analyst at the Korea Meteorological Administration, said South Korea’s detection of the explosion at Punggye-ri hinged on the method of the blast as well as the amount of explosives used.

“Punggye-ri is far, but if the North uses a lot of explosives, we’d know within a minute after the explosion,” Woo said. Authorities would also know whether the resulting earthquake was natural or man-made by looking at the seismic wave. A P wave, which stands for primary, predominates in a man-made earthquake.

North Korean leader Kim Jong-un told South Korean President Moon Jae-in on April 27 during a summit that there were “two giant underground tunnels in addition to the ones that were previously known.”

According to 38 North, a North Korea analysis website, the East Portal was used for Pyongyang’s first nuclear test in 2006 but evidently abandoned shortly after that single use due to contamination. All five other tests were held in the North Portal.