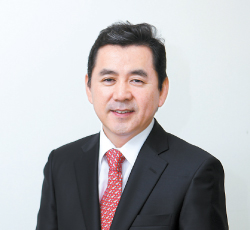 The Korea JoongAng Daily sat down on Thursday with Kim Yeon-myung, a former ITF official and vice president of the Korea Transport Institute (KOTI), a government-run think tank that conducts research transport policies and makes policy proposals to the central government. Kim attended this year’s summit to discuss the significance of South Korea’s leadership of next year’s ITF and the country’s growing role in the global transportation industry.

“It’s quite meaningful that South Korea is the co-host of next year’s ITF, especially given the topic of the summit,” said Kim, referring to the forum’s theme of transport connectivity for regional integration.

“It is about the role of transportation integration across borders and its impact on economic development, which will be crucial for South Korea when economic cooperation with North Korea resumes.”

One of the main benefits of inter-Korean economic exchanges to the South will be the reconnection of its railways and roads to the rest of Asia, according to experts.

Although South Korean roads are linked to those in the North, passage through them is blocked.

This makes South Korea, although it is geographically a part of mainland Asia, functionally an island. Experts, including Kim, think that if passage between the two Koreas is allowed, South Korea will be able to extend land connections to China, Russia and the rest of Europe, which will pave the way for Korean companies to deliver goods more efficiently and cheaply than they can now.

Whether inter-Korean economic exchanges will resume is still up in the air. U.S. President Donald Trump pulled out of the North Korea-U.S. summit originally slated for June 12 in Singapore, which could put a damper on improving relations between the South and North.

“The predecessor of the ITF is the European Conference of Ministers of Transport, which was a gathering of transport ministers in Europe where they discussed the development of infrastructure in the wake of the Second World War,” explained Kim. “That was the role of the ITF, connecting different countries in transport. South Korea becoming the co-host of such an event with the given topic will provide an opportunity for the country to expand its transport connectivity.”

Kim explained that ties between the ITF and South Korea go back to when the ITF was first launched nearly a decade ago.

According to Kim, KOTI was one of the first transport think tanks in the world to partner with the ITF on joint research into transport-related topics. In 2010, the ITF and KOTI hosted a joint seminar on green growth in transport.

“South Korea must rely on this established relationship,” Kim said. “When carrying out national projects, there are many obstacles and possibly some conflicts with other concerned parties. In such cases, we need an international organization with authority, such as the ITF, to mediate and provide insight.”

South Korea’s role in the future of transport is not limited to policy-making.

“South Korea excels in the development of transport system utilizing information technology,” Kim said. “Things like [Korea’s] transportation card, which allows a person to ride on any type of public transportation, are recognized globally.”

However, “South Korea does have a long way to go when it comes to road safety,” Kim added.