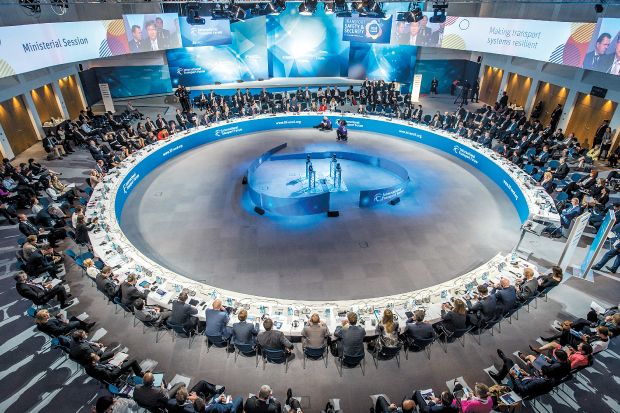 Ministers of transport meet at the International Transport Forum in Leipzig, Germany, on Friday. This year’s forum took place under the theme of “Road Safety and Security.” [INTERNATIONAL TRANSPORT FORUM]

LEIPZIG, GERMANY - As road safety remains an issue in the global transport industry, leaders and government officials around the world convened at this year’s transport summit in Leipzig, Germany, to discuss how the international community can eradicate, or at least reduce, the number of fatal accidents on roads across the globe.

“We are here to discuss how we could make transport even safer and more secure,” said Kim Young-tae, secretary general of the Organization for Economic Cooperation and Development’s International Transport Forum (ITF) and formerly a high-ranking official at Korea’s Ministry of Land, Infrastructure and Transport, at the opening ceremony of the summit on May 23. “In this digital era, there are new questions and fears [as well as] a dramatic rise in demand for transport [which] challenges us to provide more sustainable and safer ways for people to travel.”

The ITF is an annual summit that discusses the latest issues and trends in the global transport industry. The forum this year was co-hosted by the Latvian government and took place under the theme of “transport safety and security.”

Some 1,300 delegates from 74 nations attended this year’s summit, which included some 40 transport ministers as well as representatives of international organizations such as the United Nations (UN) and the World Bank. The delegation from Korea - which will preside over next year’s summit as the co-host - was headed by Kim Hyun-mi, the transport minister.

“There are 1.3 million road deaths every year, and questions remain over how we can improve road safety,” explained the secretary general in a press briefing on May 23.

Fred Wegman, chair of the International Road Traffic Data and Analysis Group (Irtad), a body under the ITF that publishes the “Road Safety Annual Report,” an annual road safety study, explained that the number of road deaths in the world have retreated by nearly 40 percent since 2000, but progress has slowed in recent years. Wegman attributed the change to a number of factors including the rise in the number of people using mobile phones while driving.

At the forum, experts and leaders shared their insights into how the international community could bring down this figure.

His Royal Highness Prince Michael of Kent of the United Kingdom, an advocate of road safety and the founder of the “Prince Michael International Road Safety Awards” and the Toward Zero Foundation, urged the global leaders to take more aggressive steps, proposing a “three-point plan.” In the plan, the British royal suggested the UN revise its target for road safety to halve road deaths by 2030. Previously, the UN in 2010 set out a 50 percent reduction in road fatalities by 2020, which experts say is unrealistic at this point.

The prince also called on leaders and policymakers to boost funding and bolster political commitment.

Another hotly debated topic at the summit was the effectiveness of autonomous vehicles in improving road safety, a point on which leaders and experts at the forum diverged in their views.

“Is automated driving safer? We don’t know at this moment,” explained Philippe Crist, project manager at the ITF. “Automated driving would decrease road crashes because 90 percent of them involve human error; this is a bold statement and not a complete one, because just removing human error does not mean machine errors will not occur.”

“Fifty percent of traffic fatality takes place in rural America, but autonomous vehicles best operate in urban setting, statistically not where traffic fatalities happen,” explained Derek Kan, the under secretary of Transportation for Policy of the United States. “Auto vehicle level 4 and 5 will take generations and we shouldn’t wait and count on this to bring down the traffic fatality [dramatically] by 2020.”

Andreas Scheuer, German transport minister, however, was optimistic about the prospect of self-driving cars, citing ongoing research in the country such as the development of an algorithm that would allow cars to crash into other vehicles or infrastructure instead of pedestrians in case of an emergency.

Road safety has proven a difficult nut to crack for the Korean government.

In 2017, there were 4,300 casualties from motor accidents in Korea, according to government data. The Korea Transport Institute estimates that the high level of accidents has cost the country as much as 26.5 trillion won ($24.5 billion) annually, about 1.5 percent of its annual gross domestic product.

Data from the international transport body also demonstrates the gravity of the issue in the country.

According to the road safety annual report by the ITF, 8.2 out of every 100,000 Koreans were killed in car accidents in 2017, ranking the country at 29th of the 41 nations researched.

“Remedying the situation requires a government-level approach,” explained an official from Korea attending the forum. “The Transport Ministry’s initiative announced earlier this year [which aims to reduce the number of traffic deaths from 4,200 in 2017 to 2,000 by 2021] is arranged in such context.”

“To resolve this issue fundamentally, we need to establish a driving culture that protects and gives way to pedestrians and cyclists,” explained the official. “This will not happen in a short period of time.”

Next year’s forum, which is slated for May 22 to 24 in Leipzig, will take place under the theme of “transport connectivity for regional integration.”