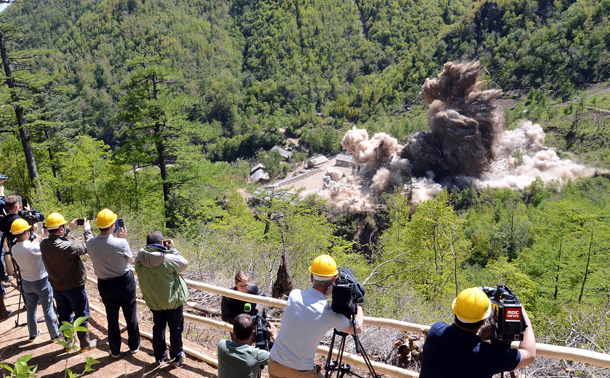 North Korea blew up three tunnels at a nuclear test site in front of a group of journalists from South Korea and four other countries Thursday, though it was unclear to them whether the nuclear site was completely shut down.

“There are four tunnels at the site, two of which have been used before in testing [nuclear devices] and another two that have not been used at all,” a North Korean official told reporters on Thursday morning at the site, on Mount Mantap in the Punggye-ri area in northeastern North Hamgyong Province. “We shut down tunnel No. 1 after the first successful nuclear test in 2006.”

“This,” he said, pointing his finger toward the entrance of a tunnel, “is tunnel No. 2, and this is where we conducted five nuclear tests from 2009 to 2017,” which included the latest test in September 2017 that sent out a 6.3-magnitude tremor.

According to the group of journalists, including eight South Koreans and journalists from international media such as CNN and the United Kingdom’s Sky News, they were shown the entrances to tunnel No. 2 and 4 from 8:50 a.m. to around 10:30 a.m., and watched the detonation of tunnel No. 2 at a point some 500 meters (1,640 feet) away, at 11 a.m.

“We could peer into the inside of the tunnel from the entrance, and tunnel No. 2 was about two meters wide and 2.5 meters tall,” said the pool report by the South Korean journalists. “There were explosives inside, from a point some two meters in from the entrance. We could not see beyond five meters into the tunnel, because it was blocked from there.”

When they asked a North Korean official why it was blocked, he said, “It was open before, but we closed it up.” He added that the tunnel would be blown up from the inside first, followed by the entrance.

The inside of tunnel No. 4 was also blocked some 20 meters in from the entrance, according to the South Korean pool report.

When tunnel No. 2 was detonated at 11 a.m., there was a “heavy booming sound, followed by another booming sound, that seemed to shake Mount Mantap,” and the group of South Korean journalists saw “dirt and rocks flowing down near the entrance of the tunnel.”

Photos taken by the journalists showed debris and dirt shrouding the entrance to the tunnel immediately after the detonation, and dust flying in the air.
A North Korean official on site announced immediately after the detonation that it was successful, and added that “dynamite was planted in the walls of the tunnel” and that there were “a total of eight explosives installed.”

After lunch, which included sandwiches, pears and apples, journalists were shown tunnel No. 3, which was also fitted with explosives.
They watched the detonation of tunnel No. 4 at 2:17 p.m. and of tunnel No. 3 at 4:02 p.m.

North Korean leader Kim Jong-un told South Korean President Moon Jae-in on April 27 during a summit that there were “two giant underground tunnels in addition to the ones that were previously known.”

Other structures near the entrances to the tunnels, including observation tents and living quarters used by researchers or the military, were also destroyed.

“True to the decision of the Third Plenary Meeting of the Seventh Central Committee of the Workers' Party of Korea, the Nuclear Weapons Institute of the DPRK held a ceremony for completely dismantling the northern nuclear test ground of the DPRK on May 24 … to ensure transparency of the discontinuance of nuclear test,” a North Korean official told reporters after the detonations, which the North’s state-run Korea Central News Agency reported in the same words that day.

DPRK is the acronym of the North's official name, the Democratic People’s Republic of Korea.
“It has been confirmed that there was neither leakage of radioactive materials nor any adverse impact on the surrounding ecological environment,” said the report.

South Korean journalists said their devices to measure radiation were confiscated when they arrived in the North.

“The discontinuance of the nuclear testing is an important process moving towards global nuclear disarmament,” said the official, “and we will continue to join hands with the world’s peace-loving people in building a nuclear-free, peaceful world, a new independent world where the dream and ideal of humanity are realized.”

The detonations at the Punggye-ri nuclear site were part of the North’s pledge to show its intention to help denuclearize the Korean Peninsula.
North Korean leader Kim Jong-un was quoted in its state media on April 20 as saying the North will never use nuclear weapons nor transfer nuclear weapons or nuclear technology under any circumstances unless the country faces a nuclear provocation or threat.

The North pledged to denuclearize in the Panmunjom Declaration signed between Kim and Moon in the inter-Korean summit on April 27.

But hours after the detonations Thursday, U.S. President Donald Trump canceled a planned summit with Kim in response to a statement by North Korea warning of a “nuclear showdown,” though he left the doors open for further dialogue in a letter announcing the decision, writing, “If you change your mind … call me or write.”

The journalists left the testing site around 5:15 p.m. Thursday, getting on a train to Wonsan, North Korea, and heard the news of Trump canceling the summit on the train.

The journalists are scheduled to leave the North on a flight to Beijing at 11 a.m. today.

No experts were invited to witness the detonation of the Punggye-ri nuclear site Thursday, and some North Korea watchers are questioning whether the detonations completely destroyed the site, and not merely the entrances to the tunnels.

Upon seeing video footage of the detonations sent by the South Korean journalists on Friday, Seoul National University’s nuclear engineering professor Suh Kune-yull said, “All you can affirm from the footage is a booming sound and some lights flashing, and since the detonations were done in daylight, you can’t tell the color of the light.

“Unless an expert checked the detonation in person at the site,” he said, “it’s hard to tell if the site was completely destroyed.”

“We cannot tell if the inside of the tunnels were completely destroyed,” said Ahn Jin-soo, a former researcher at the Korea Institute of Nuclear Nonproliferation and Control “Remember, tunnel No. 2 survived the sixth nuclear test in the mountain, which was over 60 joules strong. For the tunnel to be completely destroyed, North Korea would have needed to use explosives equivalent to 50,000 tons of TNT, but I don’t think it would have used that much.”

But there is still some meaning in the detonations, he said.

“The detonation shows North Korea is willing to denuclearize,” Ahn said. “And it sends a signal to the United States that it is ready to talk about it.”
North Korea, in 2008, destroyed the cooling tower of Yongbyon nuclear reactor in front of members of the international media but. a few months later, installed a new cooling system.