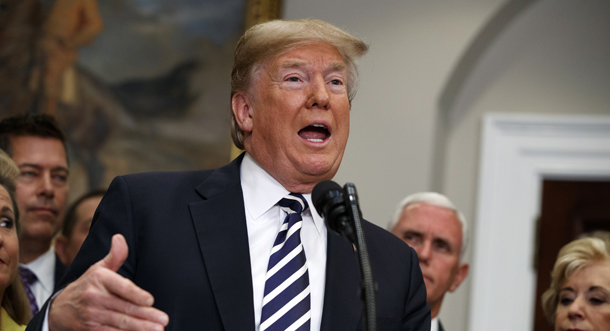 U.S. President Donald Trump called off a planned summit with Kim Jong-un in a letter released by the White House on Thursday but said the same day he was “waiting” for the North Korean leader to give a cue for dialogue, leaving open the possibility that a meeting could still be held.

“A lot of things can happen, including the fact that, perhaps - and would wait - it’s possible that the existing summit could take place or a summit at some later date,” Trump said Thursday in Washington. “Nobody should be anxious. We have to get it right.”

Trump lobbed the ball in Kim’s court, saying, “If and when Kim Jong-un chooses to engage in constructive dialogue and actions, I am waiting.” In the meantime, “very strong sanctions - by far the strongest sanctions ever imposed” will be carried out in the maximum pressure campaign against the North, Trump stressed.

The White House chief underscored that a “bright and beautiful future” on the Korean Peninsula will only happen when the threat of nuclear weapons is removed, indicating he wouldn’t back down from pushing the North to pursue complete, verifiable and irreversible denuclearization, known as CVID.

In response to Trump’s open letter to Kim that the summit, originally scheduled for June 12 in Singapore, was off, North Korea released an unusually conciliatory statement from its First Vice Foreign Affairs Minister Kim Kye-gwan on Friday morning, saying the regime was willing to talk with the United States “anytime” and in any format.

Kim Jong-un wasn’t directly quoted in the diplomat’s statement, published by the state-run Korean Central News Agency (KCNA), but the leader was said to have “exerted all efforts for the preparations for the summit” and reportedly said the meeting “could help make a good start.”

The North, “broad-minded and open all the time,” he said, “has the willingness to offer the United States side time and opportunity” to reconsider canceling the summit.

In an appeasing gesture, the diplomat said the North had “inwardly highly appreciated” the White House chief for boldly deciding to hold a summit with Pyongyang, something his predecessors didn’t dare to do. Kim said that an earlier statement from North Korea’s Vice Foreign Minister Choe Son-hui, which Trump blamed for canceling the summit, was simply a “reaction” to remarks from Washington that the regime had to unilaterally scrap its nuclear development program. 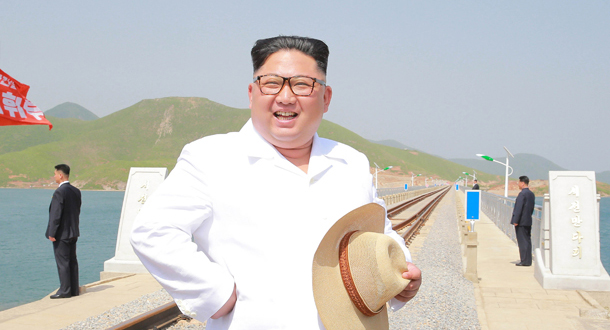 Trump didn’t give an immediate response to the North’s latest statement, but South Korea’s Foreign Affairs Ministry said that its minister, Kang Kyung-wha, talked on the phone with U.S. Secretary of State Mike Pompeo on Friday morning and that both “took note” of the fact that Pyongyang was still willing to talk with Washington.

While they discussed various ways to “maintain the momentum of dialogue” between Washington and Pyongyang, said the ministry, Pompeo told Kang that the United States was still strongly willing to talk to the North and suggested they should keep cooperating with each other to create the conditions for North-U.S. talks. 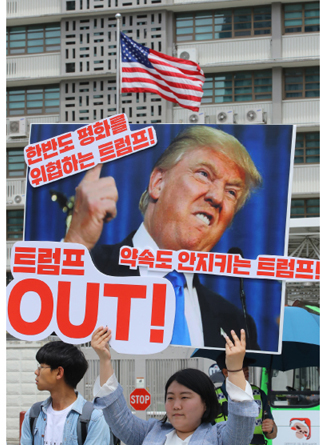 Korean college students stage a rally in front of the U.S. Embassy in Seoul on Friday to blame U.S. President Donald Trump for cancelling a planned summit. [YONHAP]

Kang expressed “regret” to her American counterpart that the June 12 summit was canceled.

On May 16, Pyongyang threatened to pull out of its planned summit with Washington, saying it had no choice but to “reconsider” the landmark meeting if the United States keeps driving the regime into a “corner” by forcing CVID. The statement, issued by First Vice Foreign Affairs Minister Kim and published by KCNA, castigated U.S. National Security Adviser John Bolton for saying the Libya model could be used to denuclearize Pyongyang, and was the first time the North openly raised the possibility of walking out.

Pyongyang sees Libya’s nuclear disarmament as the direct cause of the downfall of Col. Muammar Qaddafi and his death by Washington-backed rebel forces during the Arab Spring uprisings in 2011, eight years after his denuclearization deal was signed.

On May 17 in Washington, Trump said he wasn’t looking to the Libya model for denuclearizing Pyongyang, stressing that his deal with Kim Jong-un would make North Korea “very rich” and provide the young leader “very adequate protection.” In the same breath, however, he threatened Kim might face the same fate as Qaddafi if he refuses to relinquish his nuclear arsenal.

“But the model, if you look at that model with Qaddafi,” said Trump, “that was a total decimation. We went in there to beat him. Now that model would take place if we don’t make a deal [with North Korea], most likely. But if we make a deal, I think Kim Jong-un is going to be very, very happy.”

Behind the scenes, tensions between both countries escalated as well, according to an anonymous U.S. senior administration official quoted by American media outlets.

When Trump sent one of his deputy national security advisers to Singapore last week for a prearranged meeting to work out logistics for the summit, North Korea stood him up, the New York Times reported. In the past week, the North did not answer calls from the administration.

On Monday, U.S. Vice President Mike Pence reiterated Trump’s earlier remarks during a Fox News interview, saying the North might end up like Libya if Kim Jong-un refused to make a deal on giving up his nuclear arsenal.

That ticked off Pyongyang.

The KCNA on Thursday quoted its Vice Foreign Minister Choe Son-hui as saying she couldn’t suppress “surprise at such ignorant and stupid remarks” made by Pence, saying she would suggest to Kim Jong-un to pull out of the planned summit with Trump if the United States keeps offending Pyongyang’s “goodwill.”

Calling Pence a “political dummy,” Choe said her country would neither beg the United States for dialogue or to hold the June 12 summit, adding it was up to Washington whether the summit was on or the two countries will kick off a “nuclear-to-nuclear showdown.”

Relaying that threat, Choe mentioned it was Washington who initially asked for dialogue.

A little over 12 hours after Choe’s statement was released, the White House unveiled Trump’s letter to Kim canceling the summit, which was reportedly dictated by Trump.

“Sadly, based on the tremendous anger and open hostility displayed in your most recent statement,” Trump wrote Thursday in Washington, “I feel it is inappropriate, at this time, to have this long-planned meeting.” Trump stressed it was the North who lost a great opportunity for lasting peace, prosperity and wealth.

In reference to Choe’s remark that his administration reached out to Pyongyang first to hold the summit, Trump wrote it was “totally irrelevant” because “we were informed that the meeting was requested by North Korea.” “We” apparently referred to South Korean President Moon Jae-in’s special envoys, who conveyed Kim Jong-un’s summit invitation to Trump in March during a visit to the White House, after personally meeting Kim in Pyongyang days earlier.

The Blue House refused to clarify on Friday which side initiated the summit.

In a return to Trump’s earlier rhetoric about having a much bigger and more powerful nuclear button than Kim’s, Trump said in the letter that his nuclear capabilities were “so massive and powerful that I pray to God they will never have to be used.”

Yet Trump left often the possibility that a meeting could still be held, telling Kim, “If you change your mind having to do with this most important summit, please do not hesitate to call me or write.”

Moon convened an emergency meeting at the National Security Council at midnight on Friday, saying he was “perplexed” and felt “much regret” that the summit was called off.

Denuclearizing the Korean Peninsula is a “historic task” that cannot be delayed, Moon said. “It’s hard to resolve sensitive and difficult diplomatic issues with the current way of communications. I hope [Trump and Kim] resolve [their issues] through direct and close dialogue.”

A senior Blue House official who spoke on condition of anonymity said Seoul wasn’t informed about Trump’s decision to call off the summit in advance. Trump was said to have told the South Korean ambassador in Washington through a White House official to “quickly tell President Moon” about his letter to Kim almost simultaneously as it was made public.

Trump’s letter was issued to Kim seven minutes earlier than it was revealed to the public, NBC News reported, citing multiple officials, and no congressional leaders or key allies were given prior notice. Trump reportedly wanted to be the first to cancel the summit, and was determined less than three hours before the letter was out that he was definitely walking away from the planned meeting. Discussions to call it off began late Wednesday night between Trump, Vice President Pence, Secretary of State Pompeo, chief of staff John Kelly and National Security Adviser John Bolton.

During a Senate hearing on Thursday in Washington, shortly after Trump’s letter was released, Pompeo said Washington had not received any responses from Pyongyang “over the past many days” about inquiries pertaining to the summit. The White House wished to resume talks on denuclearization, Pompeo said, but that ultimately relied on Kim to decide.

While North Korea’s media made no mention of Kim Jong-un’s response to Trump’s letter on Friday as of press time, its state-run newspaper Rodong Sinmun ran a sizable photo of the leader smiling on the front page, in what was explained to be taken during a visit to the Koam-Tapchon Railways in North Korea’s most southeastern Kangwon Province.

The report didn’t mention precisely when the visit was made, but given that North Korean media report on Kim’s activities a day later, it’s predicted he went Thursday, after Vice Foreign Minister Choe’s statement and before Trump’s letter was released.

The newspaper ran 12 photos of his visit on the front and second pages, saying he “repeatedly expressed satisfaction” over the completion of the marine railway, which was meant to boost the local finishing industry.

A South Korean government official analyzed the report as Pyongyang’s way of bragging it was unfazed by Trump’s canceling of the summit and that its domestic economy remained stable.