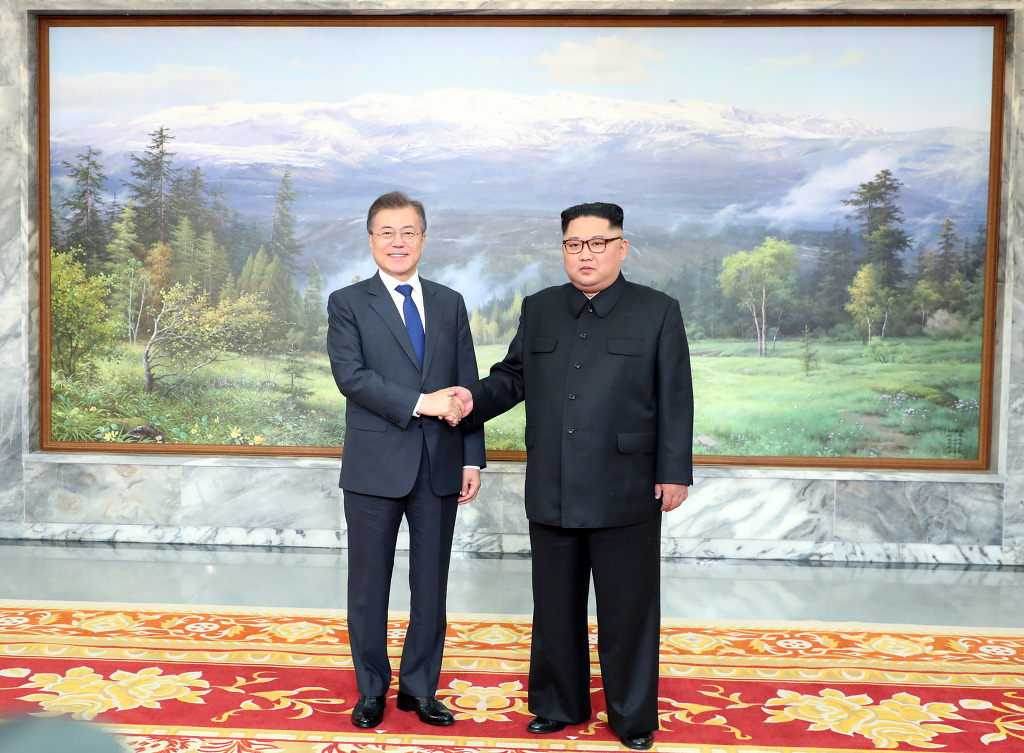 President Moon Jae-in, left, and North Korean leader Kim Jong-un pose for a photo in their second summit meeting in a month at Tongilgak, a North Korean-controlled building in Panmunjom. [BLUE HOUSE]

President Moon Jae-in attended an unannounced, hurriedly arranged meeting with North Korean leader Kim Jong-un on the northern side of the demilitarized zone Saturday afternoon, their second meeting in a month, as the diplomatic rollercoaster over a Kim-Donald Trump meeting took another surprising turn.

The Blue House on Saturday issued a brief statement at around 7:50 p.m. saying a second Moon-Kim meeting took place in the DMZ from 3 p.m. to 5 p.m. in a North Korean-controlled building, Tongilgak, on the northern side of Panmunjom.

“The two leaders exchanged frank opinions aimed at making a North-U.S. summit successful and how to carry out agreements forged in the April 27 Panmunjom Declaration,” said Yoon Young-chan, the Blue House spokesman.

Moon will announce the outcome of the meeting at 10 a.m. Sunday, according to Yoon, as part of an agreement with the North.

While details of what became the fourth inter-Korean summit have not been announced, it was almost certainly about the Kim-Trump summit scheduled for June 12 in Singapore before Trump called it off Thursday. 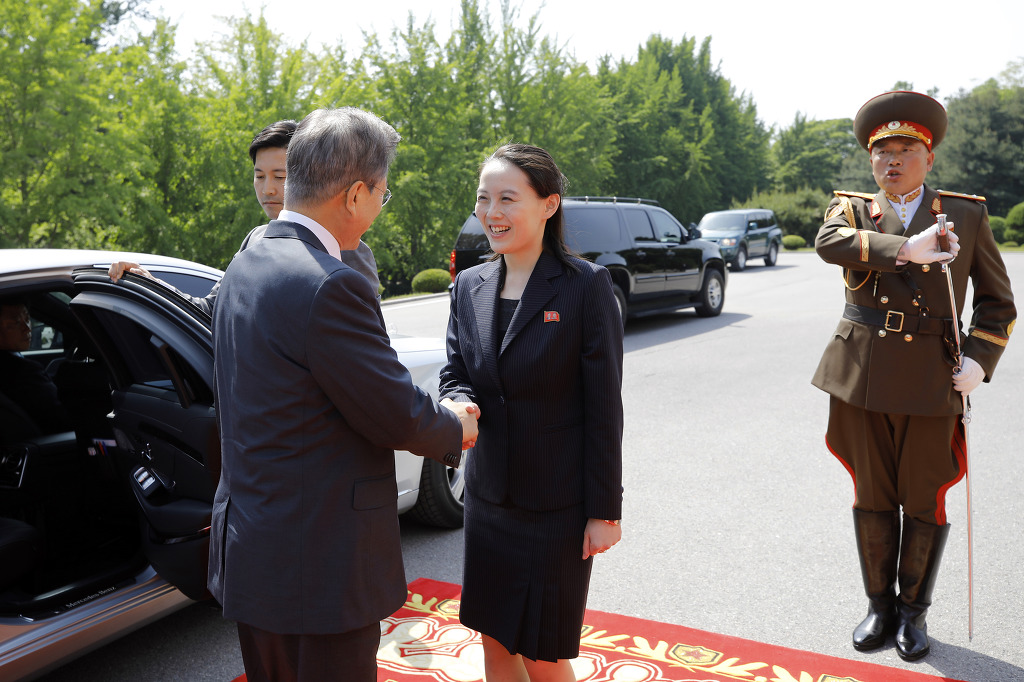 President Moon is greeted by Kim Yo-jong, the younger sister of Kim Jong-un, on his way into Tongilgak for the summit meeting. [BLUE HOUSE]

Who requested the meeting was not known.

Footage released by the Blue House showed Moon getting out of his presidential limousine and being greeted by Kim Yo-jong, the younger sister of Kim Jong-un, who wields considerable influence in the North.

Walking past North Korean soldiers saluting him, Moon met Kim in the lobby of Tongilgak, their second up-close-and-personal encounter in 29 days.

In a letter to Kim Thursday, Trump canceled the meeting in Singapore. But very quickly he floated the possibility of actually attending the summit.

The inter-Korean meeting came hours after Trump tweeted, “We are having very productive talks with North Korea about reinstating the Summit which, if it does happen, will likely remain in Singapore on the same date, June 12th., and, if necessary, will be extended beyond that date.”

Trump’s conciliatory gesture came less than two days after he called off the meeting, citing “open hostility” and “tremendous anger” displayed in the North’s statements.

Moon urged the two leaders to directly talk to each other, saying the conventional method of communication in which the North unleashes torrents of invective against the U.S should be avoided while expressing deep regret about the cancellation.

Responding to Trump’s abrupt cancelling of the summit, the North issued an unusually conciliatory statement from its First Vice Foreign Affairs Minister Kim Kye-gwan on Friday morning, saying the regime was willing to talk with the United States “anytime” and in any format.

Kim Jong-un was said to have “exerted all efforts for the preparations for the summit” and reportedly said the meeting “could help make a good start.”

Kim Kye-gwan, who threatened to cancel the U.S.-North summit just last week, said the North found Trump’s letter “unexpected” and felt “great regret” about it and said the North had “inwardly highly appreciated” Trump’s overture to the North.

Trump in turn softened his stance on the North and raised the prospect of reinstating his meeting with Kim. 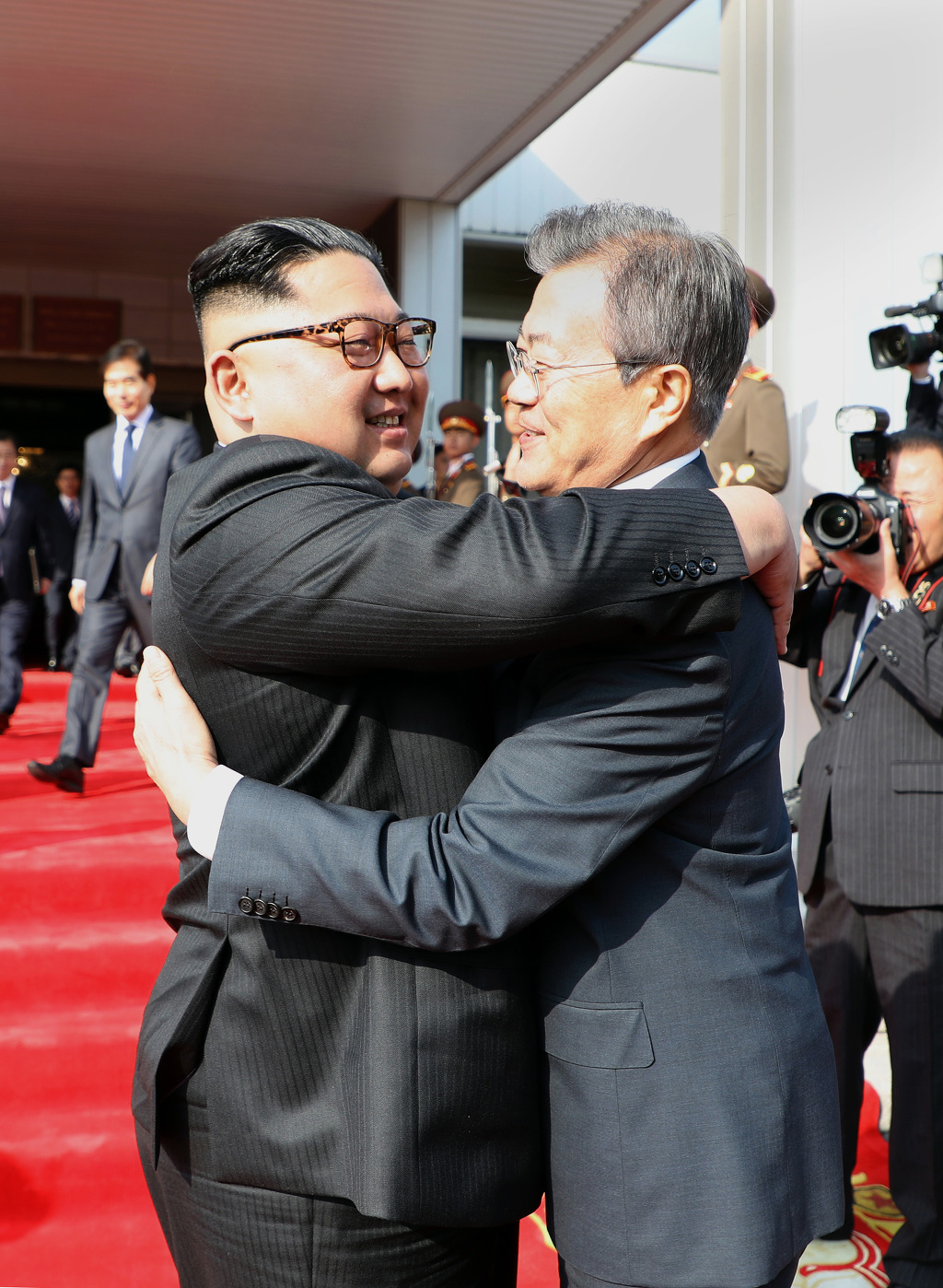 Wrapping up the meeting, Moon and Kim hugged each other before Moon got in the car to return to the South.

The unprecedented secrecy surrounding Saturday’s meeting underscored the delicate environment the two Koreas and the U.S. are in.