Eagles pitcher is on track to set record for saves

Eagles pitcher is on track to set record for saves 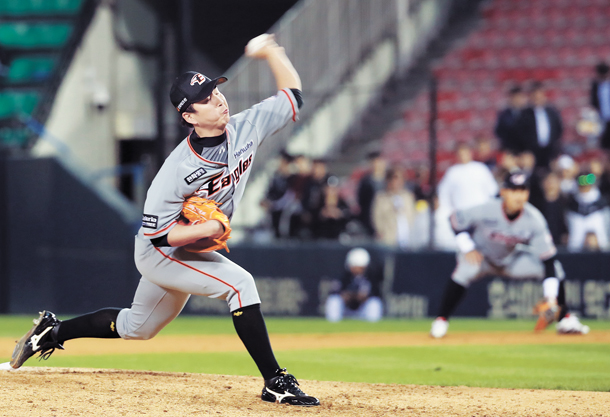 Jung Woo-ram of the Hanwha Eagles throws a pitch during the Eagles’ game against the Doosan Bears at Jamsil Baseball Stadium in southern Seoul on April 17. [YONHAP]

Jung Woo-ram of the Hanwha Eagles leads the KBO in saves this season, and if he continues at his current pace, he’ll break the league’s single-season record.

As of Sunday’s game, Jung has two wins and 19 saves with a 1.17 ERA. Not only does Jung have an impressive ERA, but his strong save numbers make him even more impressive when compared to other top closers in the KBO. Ham Deok-ju of the Doosan Bears and Jeong Chan-heon of the LG Twins are tied for second with 10 saves.

“I can’t set a specific number of saves as my goal [for the season] because I need to be on the mound at the right condition and need to pitch well,” Jung said. “So I didn’t set a goal.”

A pitcher can pick up a save when he enters a game with a team’s lead of no more than three runs and leads the team to a win after pitching more than one inning.

Jung is having the best season of his career as he leads the league in saves, and he’s getting a lot compliments from the fans - in addition to high expectations.

“When I’m on the mound in the ninth inning, the fans say that they feel comfortable or that they don’t need to worry anymore,” Jung said. “I’m very thankful for that. I’m able to finish well because the young pitchers ahead of me have been doing well [keeping our team’s lead].”

As Jung said, the Eagles’ bullpen is the strongest in the league this season. Of the 10 teams, the Eagles are the only team with pitchers that have ERAs below 4.00. Though Seo Kyun’s record 24-game 0.00 ERA finally ended during the Eagles’ game against the Bears on May 22, Seo has kept his ERA at 1.10 as of Sunday’s game. In addition to Seo, Eagles pitchers An Young-myung, Song Eun-beom and Park Sang-won have ERAs below 3.00.

Because of the Eagles’ strong bullpen, Jung has less pressure on the mound, as he doesn’t have to throw for more than an inning. During the Eagles’ three-game series against the Nexen Heroes, from May 8 to 10, Jung appeared as the Eagles’ closer for all three games. However, he didn’t throw more than 21 pitches a game and picked up saves in each of them.

“Jung Woo-ram’s pitches feel like 150 kilometers [93 miles] per hour,” said Han Yong-duk, manager of the Eagles. “He has confidence in his pitches and is very detailed, so they are harder [for batters].”

Though Jung’s average speed is barely over 140 kilometers per hour, he threatens batters with his strong control over his pitches.

“I don’t know if the pitch speed is really important,” Jung said.

The Eagles’ strong performance this season has fans expecting a postseason appearance from the team, which would be their first since 2007.

When Jung signed with the Eagles as a free agent in 2016, he was expected to help lead the Eagles to the playoffs, but he didn’t help much, as the Eagles finished seventh in 2016 and eighth in 2017. Jung believes that this season could be a breakthrough for the Eagles.

“Since I started wearing the Hanwha uniform, our team has a great atmosphere,” Jung said. “I’ll try harder to continue. If our players get through the season without injuries, we’ll be able to play in the postseason.”