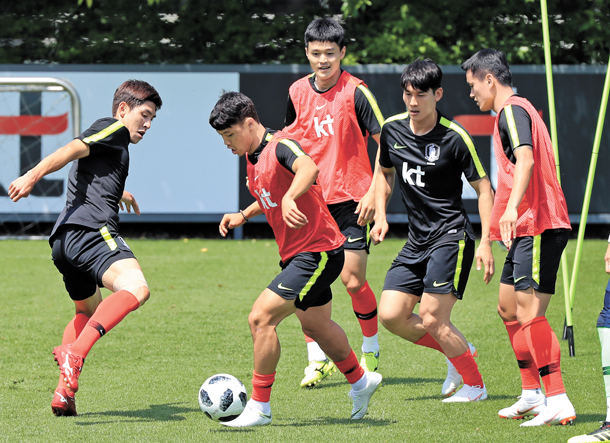 Red Bull Salzburg’s Korean forward Hwang Hee-chan said Saturday he believes that if he performs well at the 2018 FIFA World Cup, he can get more attention from other clubs.

Hwang had an impressive season with Salzburg before joining the Korean national football team for the 2018 FIFA World Cup in Russia, where his side will face Sweden, Mexico and Germany in Group F. He scored 13 goals in all competitions for Salzburg and also helped the Austrian club reach the semifinals of the UEFA Europa League.

Following his performance, foreign media reported that Hwang is wanted by clubs like Tottenham Hotspur and Borussia Dortmund this summer.

When asked about the transfer rumors, Hwang said he’ll first focus on the World Cup next month.

“If I can give an unselfish performance with the national team, I think many people’s attention will follow,” Hwang said after training at the National Football Center (NFC) in Paju, Gyeonggi. “I’ll first concentrate on winning matches.”

Hwang, who has been training with 25 other players since Monday, said he knows what he should do at the World Cup.

“Many pundits think we’re the weakest team in the group,” he said. “I think I also need to focus on defending, too. I’ll try to press the opponents from the front line.”

Hwang said he is ready to carry out any role that is ordered by head coach Shin Tae-yong. Shin recently said he is thinking of changing their main tactics for the World Cup.

“With my clubs, I played in a two-forward system,” he said. “Although the two-striker system is comfortable for me, I’ll also do my job if Shin orders me to play as a lone striker in front.”?

Hwang, 22, is the second-youngest player on Korea’s provisional World Cup roster after Lee Seung-woo, the 20-year-old attacker who plays for Hellas Verona in Italy.

“I spent lots of time with Lee in Paju,” he said. “We drank tea and had some conversation. I just told him that we need to play a good game.”

Korea will confirm their final roster of 23 players after playing two World Cup tune-up matches - against Honduras today and Bosnia and Herzegovina on Friday. Hwang, however, is considered to be safe from the roster cuts following his impressive performance with his club and the national team this season.

“I dreamed about becoming a football player after watching the 2002 World Cup [where Korea reached the semifinals],” he said. “My dream stage is coming, so I need to be prepared well.”