Lee Tae-hee comes from behind

Lee Tae-hee comes from behind 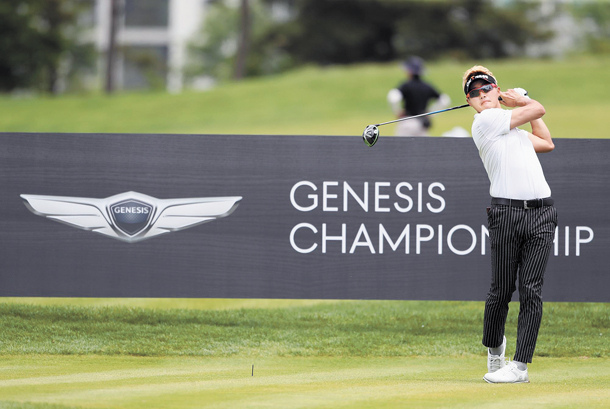 Lee Tae-hee watches his shot during the final round of the Genesis Championship at Jack Nicklaus Golf Club Korea in Incheon on Sunday. [YONHAP]

Lee Tae-hee picked up his second career victory at the KPGA Tour’s Genesis Championship at the Jack Nicklaus Golf Club Korea in Incheon on Sunday.

Lee Tae-hee started the final round in fifth place, five shots behind the leader, Lee Jung-hwan. Up until the par-3 eighth, Lee was far from the lead, as he only made pars. However, with a birdie on the par-4 ninth, Lee Tae-hee slowly made his way up the leaderboard. Lee Tae-hee added three more birdies from the 10th to 14th rounds to take the lead.

Lee Tae-hee’s birdie on the par-4 14th was the highlight of the final round. Though the hole is shorter than the other holes, at 322 yards, not many players were able to grab their drivers out on the tee box, as there is a hazard right next to the green. Rather than playing it safe, Lee Tae-hee made the aggressive decision use his driver. He hit the green in one and made a birdie to take the lead.

“I played aggressively on that hole to make a birdie only because I didn’t think that I was leading [the tournament],” Lee Tae-hee said. “But I realized once I walked up to the green that I shouldn’t have used my driver.”

With six birdies and a bogey, Lee Tae-hee shot a final round of five under par, 67, finishing the tournament at seven under par.

“I want to thank everyone, especially my family, who waited for me all this time,” Lee Tae-hee said after the round.

With the victory, Lee Tae-hee won total prize money of 300 million won ($278,370) and a Genesis G70 car. In addition, Lee earned an exemption on two PGA Tour events ? The CJ Cup @ Nine Bridges in October and the Genesis Open in February 2019.

“I’m happy about the fact that I can finally play at my dream stage,” Lee Tae-hee said. “Since I have nothing to lose, I’ll just enjoy the rounds.”

Lee Tae-hee made his KPGA Tour debut in 2006, but it wasn’t until 2015 that he won his first KPGA Tour event, the Nefs Heritage, in June 2015. With a victory in 2015, Lee Tae-hee finished the season fifth in the KPGA Tour’s money ranking and won the Tour’s Player of the Year award.

Despite his successful 2015 season, Lee Tae-hee didn’t see continued success as he adjusted to his new putter. Starting from 2016 season, the Royal & Ancient Golf Club and U.S. Golf Association banned anchored putters, which prevented Lee from using his long putter.

“Once my putting got shaky, it affected my shots,” Lee said. It was such a hard time for me. But with the trust and cheer I received from my family, I trained really hard.”

But with his second career victory on Sunday, Lee is on the way to his second KPGA Tour player of the year award. He leads the Genesis Point standings with 1,557 points.

Though Lee Jung-hwan held a three-shot lead heading into the final round, he finished as the runner up, shooting two over par in the final round to finish the tournament at five under par.

Choi Kyung-ju missed the cut after shooting nine over par in the first two rounds, along with Charlie Wi, who played in a KPGA Tour event for the first time since October 2016.

The KPGA Tour will continue at the KB Financial Group LiiV Championship, which runs from May 31 to June 3 at Blackstone Golf Club in Icheon, Gyeonggi.