LG U+ brings fans onto the green

LG U+ brings fans onto the green 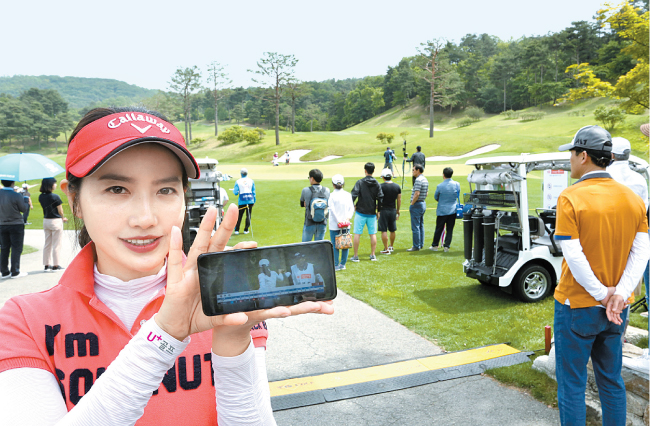 A model shows off LG U+’s new golf app, which will be offered for free to SK Telcom and KT subscribers for a month in June. [LG U+]

LG cameramen moved separately in three carts. One cart headed to the next hole ahead of the golfers, while staff in two other carts stayed glued to the athletes to shoot exclusive video footage of them.

The staff followed the movements of the golfers even on the way to the next hole under the glaring sun as they filmed for the mobile carrier’s U+ Golf app, which it launched last month.

“If you are a golf fan, you might have experienced a time when your favorite athlete was not covered much on TV because it only shows the top players in each tournament,” a spokesperson from LG U+ said. “Our U+ Golf app enables fans to see the whereabouts of their favorite athletes in extensive coverage.”

The golf videos from LG U+ differ from traditional TV coverage that gives a general overview of competitions.

The camera teams from LG stick with two to three previously selected groups of three golfers for each KLPGA game. The choice is based on the past performance and popularity of the golfers. According to LG, this enables the company to cover various athletes in depth. While it plans to cover 25 of this year’s KLPGA tournaments this way, the company said it has already covered 96 golfers with their dedicated?video team during the past seven tournaments.

The videos captured are aired live through the mobile carrier’s app using its long-term evolution (LTE) network. The company said it spent hundreds of millions of won on each golf course to establish a suitable network to transmit videos in real time.

As LG partnered with broadcasting channel SBS, the app shows overview video from SBS?together with two or three exclusive video?options based on how many groups of golfers LG is covering during the tournament. The two companies also share a pool of?broadcasters. The exclusive LG videos will feature voiceovers from SBS broadcasters.

When this reporter used the app while watching a tournament on-site, the videos were aired on the app with about a two-second delay.

LG U+ said when its next-generation 5G network is commercialized, broadcasts will have almost no delays. The company also said it will be able to cover as many as 18 groups of golfers?at once, up from the current three.

App users can also replay specific swings. If they subscribe to LG U+’s internet-based TV service as well, they can watch the same video on their TVs starting in July.

The app, however, is not yet available on the iPhone. The company said an iPhone version will be released in August.

While the app is open only to LG U+ subscribers right now, the carrier said Friday that the service will be opened to SK Telecom and KT subscribers as well for a month in June. The company hopes that some subscribers will move to LG U+ for the golf app.

The company plans to add a chat service to the app later this year. When users ask a question to broadcasters via a chat function, broadcasters can give them direct answers.

“Considering the nature of golf tournaments, the broadcasters have to comment on the tournament for about four to five hours a day, and a chatting service could be an effective tool for both users and broadcasters,” said Han Seung-oh, a team leader at LG U+ behind the concept for the golf app.

As carriers compete to use 5G technology to enhance entertainment on phones and TV, one of LG’s main focuses has been improving the diversity of its video content. The golf app was its latest attempt to change the way people watch sports.

It released an app dedicated to providing different views of baseball games in March before launching the golf app in April. It is preparing to launch another app for a different sport in September.

“We hope to provide exclusive benefits to U+ subscribers through the apps,” Han said.