Kim Jong-un is worried about his regime’s security, says Moon

Kim Jong-un is worried about his regime’s security, says Moon 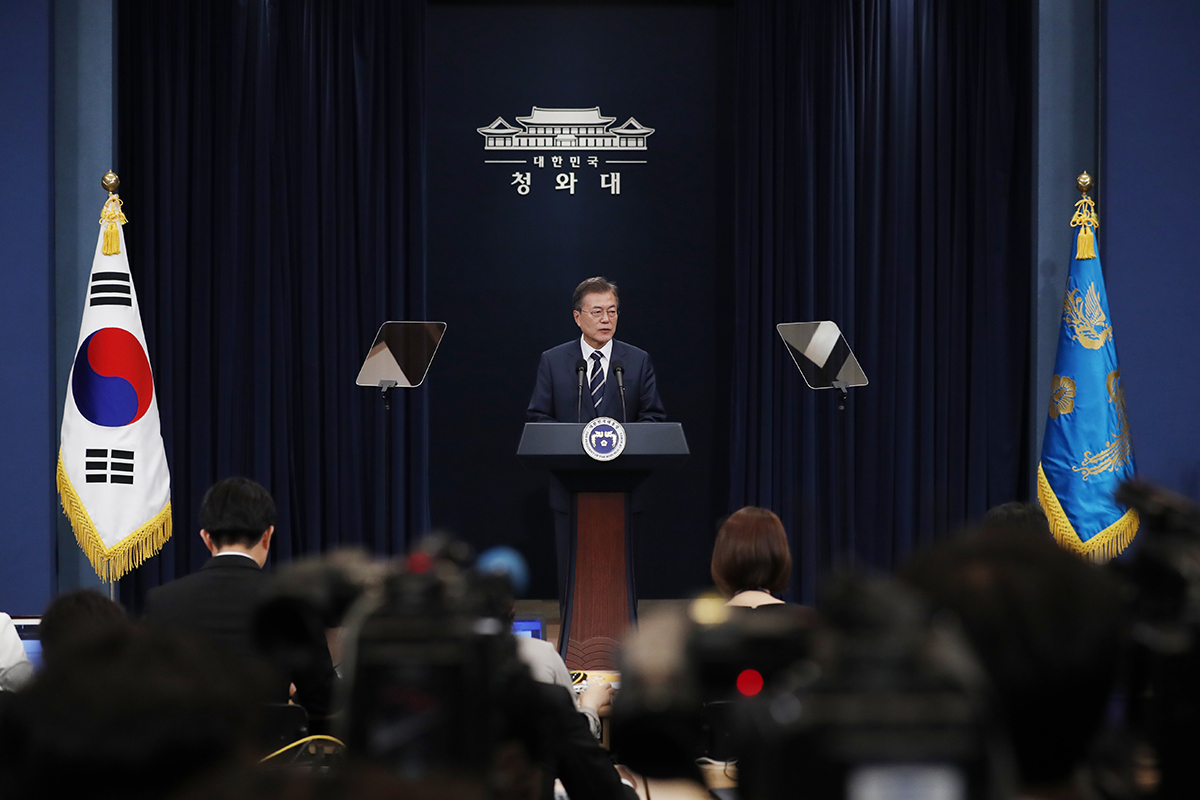 President Moon Jae-in on Sunday describes his summit meeting with North Korean leader Kim Jong-un at the Blue House. The announcement came 17 hours after the surprise meeting ended a day before on the northern side of Panmunjom. [BLUE HOUSE]

President Moon Jae-in said Sunday North Korean leader Kim Jong-un made clear a commitment to “complete denuclearization” but also expressed concerns about his own regime’s security during a surprise summit held Saturday afternoon in Tongilgak, a North Korean-controlled building on the northern side of the border village of Panmunjom.

“North Korean leader Kim once again made it clear yesterday that he was determined to carry out complete denuclearization of the Korean Peninsula,” said the president during a live press briefing held from 10 a.m. at the Blue House Sunday, 17 hours after his meeting with Kim ended at Tongilgak.

Moon said that while Kim’s commitment to rid his country of nuclear weapons was clear, what was unclear to Kim was the level of guarantee Washington will make for his regime’s security to compensate for disarmament.

“I think what worries Chairman Kim is whether or not he could have complete trust in the U.S.’s promise that it will end its hostile relations with the North and guarantee its regime’s safety if he carried out denuclearization,” Moon said.

“On the other hand, President Trump made it clear to me during our summit [in Washington last Tuesday] not only would he end the confrontational relation with the North should it choose denuclearization, but the U.S. was willing to help it to achieve economic prosperity,” continued Moon. 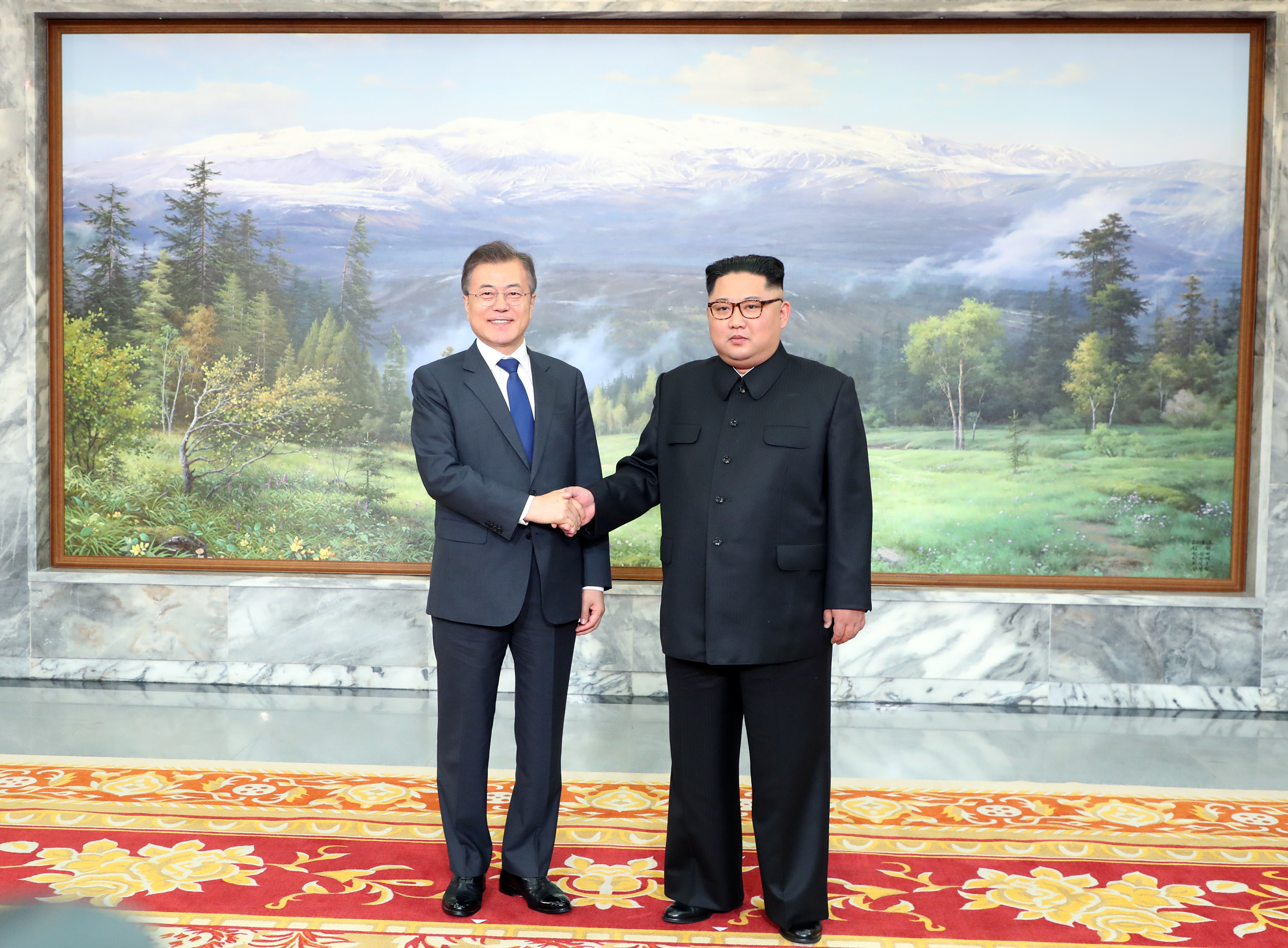 President Moon Jae-in, left, and North Korean leader Kim Jong-un pose for a photo in their second summit meeting in a month at Tongilgak, a North Korean-controlled building in Panmunjom, on Saturday [BLUE HOUSE]

On Washington’s plan to bring economic prosperity to Pyongyang if it denuclearizes, a senior presidential official who asked not to be named said Trump remarked a few times that he was willing to have economic cooperation with the North on a large scale in return for denuclearization, even citing some possible examples.

The official declined to go into detail with the examples.

“Kim expressed his stance that he will cooperate [with the South] to put an end to the history of confrontation and war on a path towards peace and prosperity through having a successful North-U.S. summit,” continued Moon. 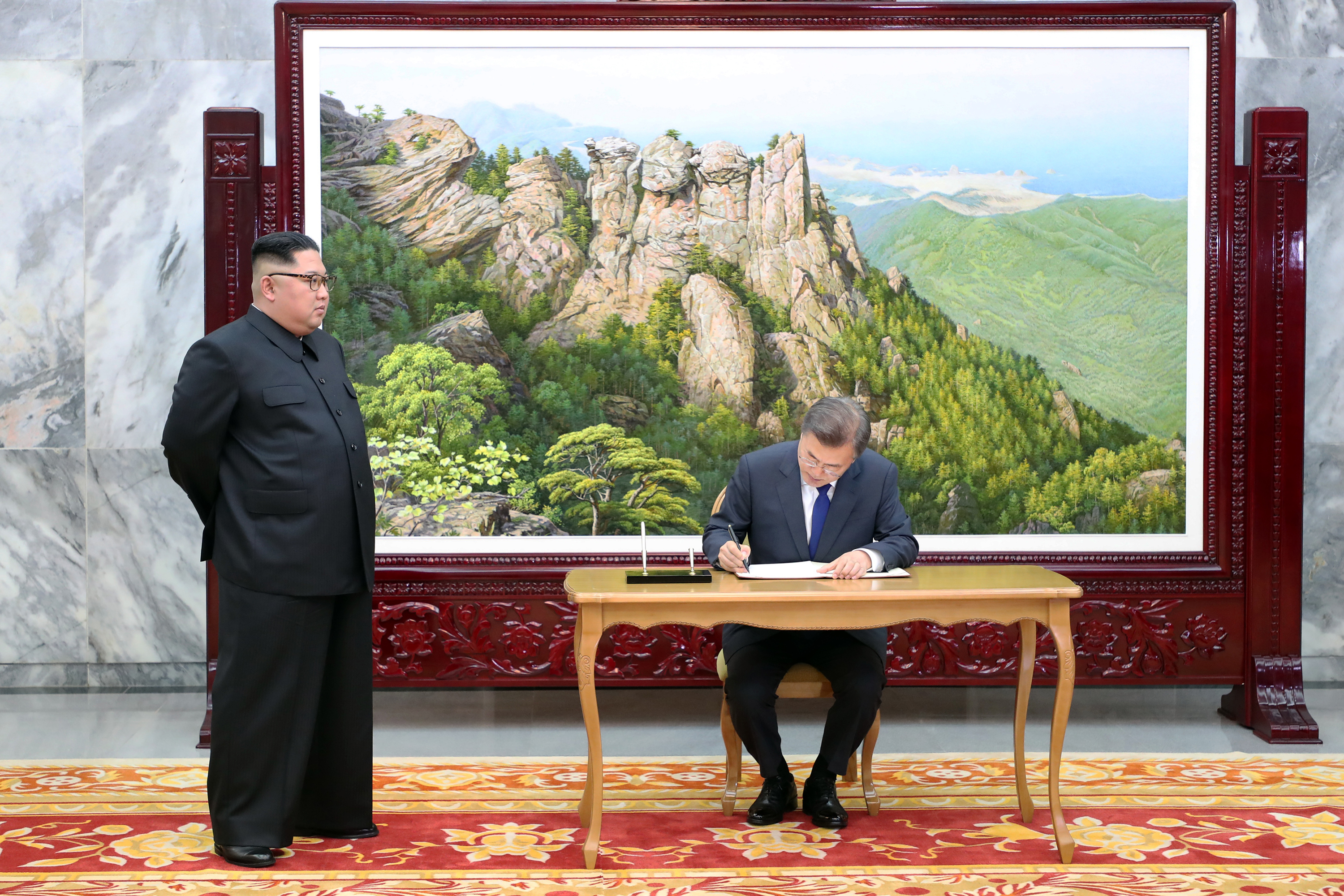 On whether he confirmed the North’s intention to denuclearize in a complete, verifiable, irreversible dismantlement (CVID) manner, Moon said the question of how the North would get rid of its nuclear arsenal would be discussed between Pyongyang and Washington, sticking to his role as a mediator between Kim and Trump.

“While they may be on the same page for denuclearization, a roadmap of how to achieve it needs negotiations between the two and could be a difficult process. It is not appropriate for me to share my thoughts on the issue before the North and U.S., as it is the matter to be decided by the two.”

Moon signaled that the two sides have found some level of agreement, saying, “The fact that there have been working level talks between the two indicates the U.S. has affirmed the North’s determination [for denuclearization].”

Moon said he was “urging the two [countries] to confirm the other’s determination through direct dialogue.

“I emphasized the need for each side to talk to each other through a direct communication channel to put at ease misunderstandings and that plenty of advance talks would be necessary through working-level negotiations to select agenda topics to be discussed at the summit meeting, to which Chairman Kim agreed,” Moon said.

His urging of Kim to use a direct communication channel jibes with a statement issued early Friday in response to Trump’s sudden calling off the Singapore summit in which Moon called for a new method of communication between the two, stressing the old method would not do with so much at stake.

Though it was not included in the announcement Sunday, Moon might have advised Kim to stop the invectives against the U.S. that it has often employed when making demands.

Moon also said he and Kim agreed that their “journey towards the denuclearization of the Korean Peninsula and a permanent peace regime settlement must not grind to a halt. And to that end, we agree to continue close cooperation.”

Moon also offered one detail on how the quickly arranged meeting took place. He said North Korea proposed the meeting Friday afternoon, in the aftermath of a confusing 24 hours that saw the June 12 Kim-Trump summit meeting called off by Trump — only to see the prospect of holding it being revived.

The fact that it was Kim who proposed the fast-arranged meeting, only hours after the North issued an unusually conciliatory statement to Trump expressing its wish to have the June 12 summit meeting with him and its regret over Trump’s cancellation, suggests Pyongyang’s wish for the Kim-Trump meeting to take place.

“Such a fast response and flexible attitude shown by North Korean leader Kim underscores the high stakes he has placed on having the North-U.S. summit meeting,” said Cheong Seong-chang, a senior researcher at Sejong Institute specializing in North Korea affairs.

On April 27, Moon briefly made a crossing into the North by walking over a demarcation line at Panmunjom for about 10 seconds at Kim’s suggestion, creating a sensation both at home and abroad.

On why he waited more than 12 hours to announce the outcome of Saturday’s meeting, Moon said it was at Kim’s request. The North needed time to prepare its own media coverage of the surprise meeting.

“We agreed to communicate with each other at any time through talking over the phone and meeting in person whenever it is deemed necessary,” he said while stressing the significance of holding such an unprecedented summit so quickly arranged without the burdens of protocol.

Reiterating his conclusion that Kim was sincere about denuclearization, Moon credited the latter for voluntarily shutting down the Punggye-ri nuclear testing site in North Hamgyong Province and suspending nuclear tests and missile launches.

Moon said what his administration has been pursuing with the two governments in Pyongyang and Washington amounted to “changing the flow of history.”

“We have made the PyeongChang Winter Olympics the Peace Olympics,” said Moon of the North’s participation in the games early this year. “We are now paving a new path toward peace and prosperity from Panmunjom, the long-running symbol of tension and confrontation.”

Moon met with Trump and Kim in the same week trying to straighten out misunderstandings between the two and help get the Singapore summit back on track.

“All the efforts I have been making are for improving inter-Korean relations,” he said. “But also, it is for making the North-U.S. summit a success that we need for improved inter-Korean ties.”

Speaking in emotional terms, Moon pledged his utmost efforts to accomplish his objective in the fast-changing diplomacy and asked for Koreans’ support.

“Just as climbing the mountain gets harder when the sight of a summit is within view, the path towards complete denuclearization of the Korean Peninsula and complete peace will not be an easy one,” he said.

“But as President, I will take that path and will make it to the end with all the duty and power entrusted by the people. I hope my Korean people will join the journey.”