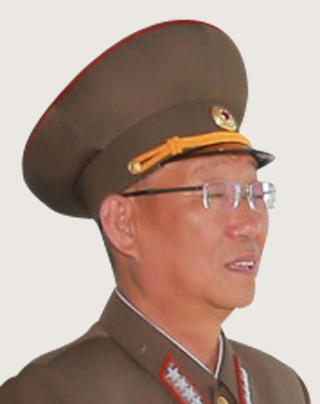 This report introduced Kim Su-gil, who has served as chairman of the Pyongyang City Committee of the Worker’s Party, as the director of the General Political Bureau of the North Korean People’s Army. He was photographed standing right behind North Korean leader Kim.

He replaces Kim Jong-gak, a former North Korean defense minister, who had been appointed director of the General Political Bureau in February. This powerful bureau is responsible for controlling personnel affairs and censorship of military executives, along with reinforcing the Workers’ Party’s control of the military. Its director is seen to rank among the top five figures in North Korea in terms of power. Hwang Pyong-so, a vice marshal of the People’s Army, served as a director previously.

Kim Su-gil may have been appointed to his new post in a meeting of the seventh Central Military Commission of the Workers’ Party, chaired by leader Kim, on May 17.

A career soldier, he has rapidly ascended the ranks since Kim Jong-un took power and set aside his uniform to become head of the Pyongyang City Committee of the Worker’s Party in April 2014. He gained two stars in rank to become a general with the recent appointment to head the Army’s General Political Bureau.

Kim was part of a delegation of senior North Korean Workers’ Party officials that made a visit to China from May 14 to 24, where they studied its economic reforms and met Chinese President Xi Jinping.

Kim Jong-un’s inspection of the construction of a tourist zone appears to have coincided with a visit by a group of journalists from five countries, including South Korea, to Wonsan Friday after witnessing the demolition of the Punggye-ri nuclear test site in North Hamgyong Province, further north, the previous day.

The latest military reshuffle comes amid signals that a North Korea-U.S. summit will be held as planned. There is interest in who will be part of North Korea’s advance delegation to Singapore to meet with U.S. officials and plan for a first summit between North Korean leader Kim Jong-un and U.S. President Donald Trump, which could happen on June 12 in Singapore.

There is a likelihood that the North Korean advance team could include Kim Chang-son, a chief aide to leader Kim who serves as director of the North’s State Affairs Commission Secretariat, as well as Kim Yong-chol, director of the North’s United Front Department, which is responsible for inter-Korean relations. They will have to figure out various security and protocol issues ahead of a leaders’ summit.

Kim Chang-son was spotted in Beijing Thursday but later flew back to Pyongyang, sparking speculation that he may have been en route to Singapore.