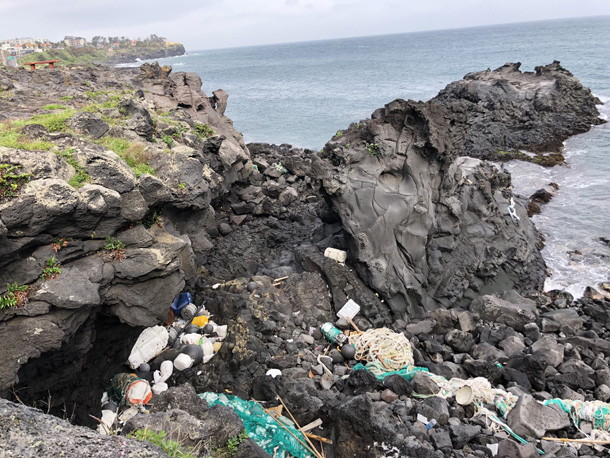 Waste thrown out by visitors on a beach in Sineom-ri, Aewol, a small neighborhood in Jeju City. [CHON KWON-PIL]

Jeju Island, prized for its natural beauty, has a trash problem thanks to the waves of visitors over the past decade.

According to the local government, the amount of garbage on beaches alone increased 30 percent from 9,600 tons in 2012 to 14,000 tons last year.

Standing at the edge of a rock on a beach in eastern Jeju City, environmental activist Kim Jung-do took a deep sigh looking at the plastic bottles and other waste.

“We can fill about 40 to 50 large trash bags with the waste from a 100-meter [328-foot] radius,” said Kim, a member of the Korean Federation for Environmental Movements.

Kim recommends the local government impose taxes on disposable items to reduce the amount of trash on the island.

Waste collected at beaches cannot be recycled due to its exposure to salt. And the beaches aren’t the only places with too much trash.

Daily waste on the island has almost doubled in the last few years from 764 tons a day in 2011 to 1,332 tons last year, according to a study by the local government.

Since 2015, Jeju Island has been compressing paper and polyethylene terephthalate, or PET, which is used to make plastic bottles, to send it to solid-recovered fuel (SRF) sites.

But these efforts can’t keep up with the trash. At one landfill in Hoecheon-dong, Jeju City, there are some 50,000 bags of compressed plastic and paper that weigh one ton each, creating a mountain of trash.

“There aren’t many places that take in compressed trash rejected by SRF sites for its low quality,” said Lim Yong-gu, an employee at Jeju’s environmental management office.

Local government points to the skyrocketing population and waves of tourists as the sources of the problem.

According to a population census carried out by authorities, since 2009, the number of residents in Jeju increased by 10,000 persons a year, to 683,000 people last year.

With budget airlines flying to Jeju, such as Jeju Air and Eastar Jet, the number of tourists increased by about three times from 5.8 million in 2008 to 14.8 million last year.

But tourists aren’t the only ones to blame, as Jeju residents throw out 1.92 kilograms (4.23 pounds) of trash per person - twice the national average.

The waste piling up in Jeju has also caught international attention as the U.K.-based BBC News selected the island as one of five places “tackling too many visitors,” in an article released last month.

“Though the increasing number of tourists is also a problem, the bigger problem is the rate at which that number is rising,” said Kang Seong-il, professor of tourism at Jeju National University. “We’re seeing a sudden rise in the number of tourists when we’re not ready to have that many people.”