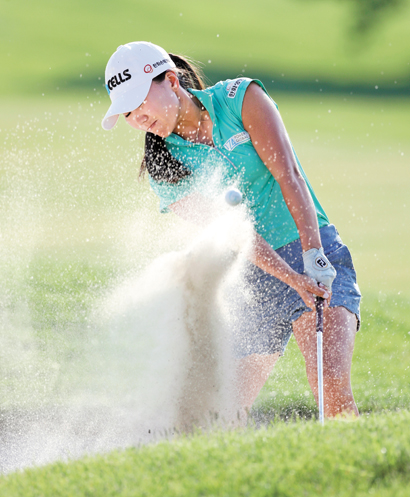 Kim In-kyung hits a bunker shot during the third round of the Volvik Championship at Travis Pointe Country Club in Ann Arbor, Michigan, on Sunday. [AP/YONHAP]

Kim In-kyung came up one shot short behind Lee Min-jee of Australia at the Volvik Championship at Travis Pointe Country Club in Ann Arbor, Michigan, on Sunday. 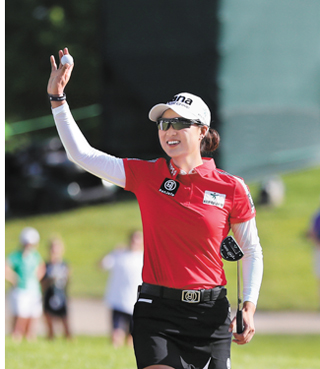 Birdies on the 13th and 14th holes allowed Kim to tie for the lead with Lee, but a bogey on the par-4 15th quickly led her to drop a spot. While holding a one-shot lead, Lee started to extend her lead with a birdie on the par-5 14th, hitting the green in two.

“Overall I had a really solid day,” Lee was quoted as saying on the LPGA website. “I think I was striking it well and putting it pretty well.”

This is Lee’s first win since the Blue Bay LPGA in October 2016. As this is a long-awaited win that comes right before the U.S. Women’s Open, which starts on Thursday, Lee will head into the tournament more confident than ever.

“I’ll go there and check out the golf course and hopefully have a good week, too,” Lee said.

Lee also saw a big jump in her world ranking, moving up seven spots to eighth.

Though Kim missed her shot at winning her eighth LPGA Tour title, she said that her runner-up finish increased her confidence heading into the U.S. Women’s Open.

“I like to put myself in that position as often as possible,” Kim was quoted as saying on the LPGA website. “It’s my first time playing this course as well, so it’s been very inviting.”

Kim’s last victory was in August 2017, when she won the Women’s British Open.

Though Kim hasn’t won a tournament this season, her runner-up finish allowed her to move up a spot to seventh in the Rolex Women’s World ranking, updated on Monday.

“I’m still trying out a few things,” Kim said. “Everything’s coming along … and I feel like it’s been a lot of grinding, so it’s really nice to have some kind of assurance.”

Ji Eun-hee, too, is feeling positive heading into the major tournament this weekend. She had two top-10 finishes prior to the U.S. Women’s Open. Ji finished the Volvik Championship tied for 10th at 10 under par.

After the tournament, Ji was one of the first golfers to head to the airport on Sunday, as she had not yet played a round at the course.

“As long as I keep my condition well physically during the U.S. Open, I think I’ll play well,” Ji said. “My goal is to win at every tournament.”

Many of the golfers at the Volvik Championship considered the tournament a tune-up for the upcoming U.S. Women’s Open. Notable golfers such as Park Sung-hyun, Jennifer Song and Haru Nomura missed the cut, but considered it an opportunity to play an extra round at Shoal Creek Golf and Country Club in Alabama.

Since the players that missed the cut for the Volvik Championship were allowed to play a bonus round at Shoal Creek, those players quickly changed their flights to head over to Alabama days earlier than the others. The missed cut may have been a good decision for the golfers, as a tropical storm warning was issued in Alabama.

“I’ll look over the course on Monday and might have to take the next two days off, depending on the weather,” Ji said.