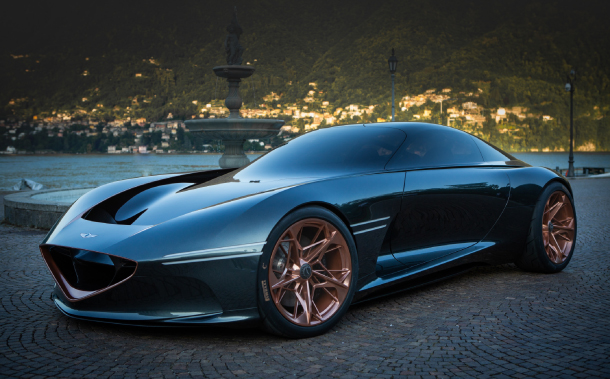 Genesis showcases its fully-electric Essentia concept at the Concorso d’Eleganza Villa D’Este 2018, which was held by Lake Como in Italy on Saturday and Sunday. [HYUNDAI MOTOR]

Genesis is moving up in the world.

Hyundai Motor’s standalone premium brand made its debut at the Concorso d’Eleganza Villa D’Este, one of the world’s oldest and most prestigious car shows.

The annual event was held by Lake Como in Italy on Saturday and Sunday.

The Concorso d’Eleganza Villa D’Este, which has been held on the shores of Lake Como since 1929, is best known for showcasing vintage cars and concepts from luxury carmakers.

This year, Genesis displayed its concept car alongside Ferrari and other carmakers.

Manfred Fitzgerald, head of the Genesis brand, and Luc Donckerwolke, the carmaker’s design head, participated in the show.

If it goes on sale, it will be a big step forward in luxury and performance for the Genesis brand. The Essentia’s design is highlighted by its flashy butterfly doors and the brand’s signature crest grille. It can accelerate to 100 kilometers (62 miles) an hour in less than three seconds.