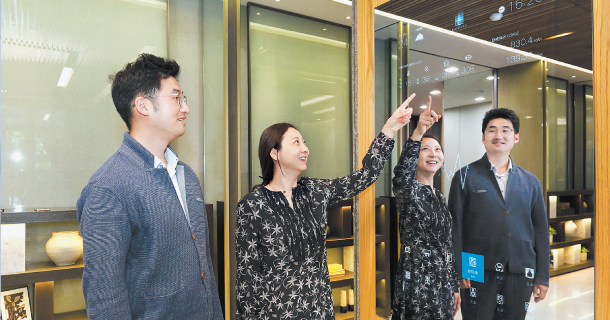 Two employees from Samsung C&T test a smart mirror which shows data customized for residents, including the weather, digital memos and daily schedules. The mirror was installed in the construction company’s model house. [SAMSUNG C&T]

Samsung C&T, the construction arm under the electronics giant, plans to make homes that are so smart they can recognize residents’ needs even before they call out for help.

When this reporter stepped into the 54-pyeong (1,921 square-feet) model house of Samsung C&T’s Raemian apartment brand in Munjeong-dong, southern Seoul, on Monday, the house welcomed the guest with a cool “air shower” to blow away fine dust.

The air shower was just the beginning of the high-tech features that the “Raemian IoT Homelab,” the model house to be opened to the public from June, had to show off.

The demonstration went from strength to strength as an employee entered the next room and waved his hand to automatically open the curtains. This “Star Wars” style magic trick was actually achieved as the internet-connected curtains communicated with the smart watches the demonstrators were wearing. The movement picked up by the gyro sensor in the watch triggered the curtains.

Lazy home owners - or those who don’t like to wear watches - need not fear, as the smart curtains and other features in the house can also be controlled by voice command and a smartphone app.

According to Baek Jong-taek, a senior vice president at Samsung C&T, most of the concepts will become reality by the end of this year and could be included in actual homes from next year. As the company is scheduled to begin presales of nine apartment complexes next year, they are the main targets for the latest Internet of Things (IoT) systems.

“Whether all apartment units will be equipped with the system will depend on discussions with stakeholders such as apartment owners,” said Kim Myung-suk, vice president of the product design group at Samsung C&T. “The IoT system could be offered as a premium option only for residents that want extra smart home features.”

The constructor said it welcomes many more partners who would like to open up part of their software to make a richer smart home environment including Samsung rival LG Electronics.

Monday’s event came as a surprise not only because top-notch IoT tech was introduced, but also because there have been rumors that Samsung plans to ditch its Raemian brand due to the low profitability of the reconstruction business. Last time it won a reconstruction order to build a Raemian apartment complex was in September 2015.

Kim, however, made clear that Samsung has never said it would “not participate in reconstruction project bids” and added that the company “has been reviewing quality business opportunities.”

Industry insiders said the event may be a sign that Samsung is back in the game with the upgraded Raemian brand.