Talks attempt to save summit for Trump-Kim

Talks attempt to save summit for Trump-Kim 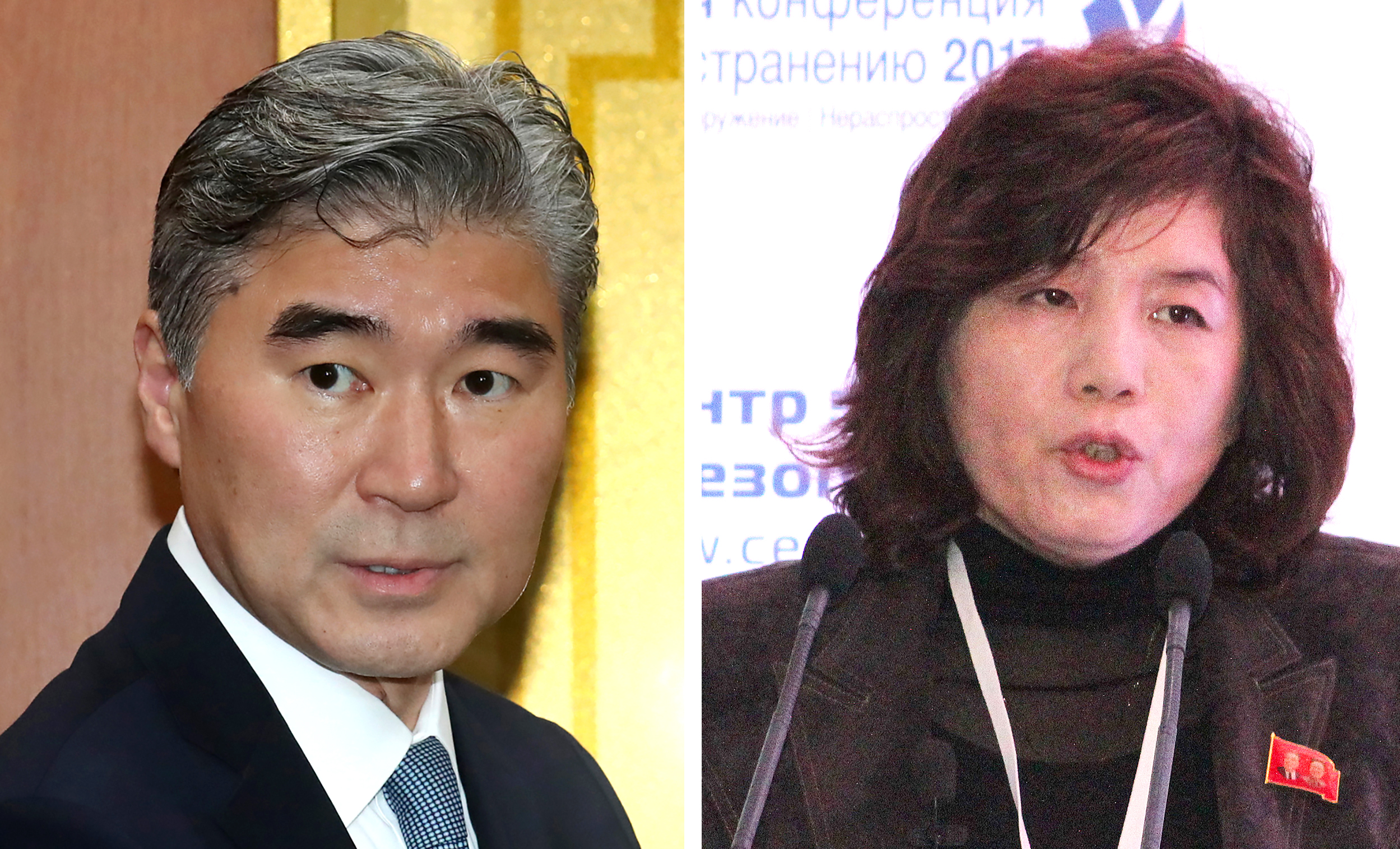 Meetings between American and North Korean officials are underway simultaneously in Panmunjom and Singapore as the two nations strive to revive a June 12 summit between U.S. President Donald Trump and North Korean leader Kim Jong-un.

Sung Kim, the U.S. ambassador to the Philippines, was called from his post in Manila to lead the U.S. delegation to the truce village of Panmunjom in the demilitarized zone for pre-summit talks with North Korean diplomats. Kim is a former American top nuclear envoy and ambassador to South Korea.

He and his team met Monday with a North Korean team led by Choe Son-hui, a vice foreign minister who has specialized in dealing with the United States, in the Tongilgak building on the northern side of Panmunjom, about the planned summit between their leaders. More meetings will take place today.

The main topic appeared to be the level of North Korea’s commitment to denuclearize.

Kim, a Seoul-born career diplomat fluent in Korean, previously served as the U.S. special representative for North Korea policy and deputy assistant secretary for Korea and Japan. He was the U.S. ambassador to South Korea from 2011 to 2014.

Choe previously served as a deputy director of the Foreign Ministry’s North American Affairs Bureau and was an aide and interpreter in the now defunct six-party talks to denuclearize North Korea.

The two diplomats have crossed paths several times in the past, especially during the six-party negotiation process.

The Washington Post reported Sunday that the meeting was aimed at salvaging the June 12 summit, which Trump canceled on Thursday. The U.S. team was said to include Allison Hooker, a Korea specialist on the White House National Security Council (NCS), and Randall Schriver, the assistant secretary of defense for East Asian and Pacific security affairs.

Tongilgak was also the location of the second summit between South Korean President Moon Jae-in and North Korean leader Kim Jong-un on Saturday, in which the two agreed to some type of complete denuclearization and efforts to successfully hold a June 12 North-U.S. summit. The first Moon-Kim summit on April 27 was held on the southern side of Panmunjom, at the Peace House, to great media fanfare. The second was held with no prior notice and only announced hours after it had concluded.

Trump announced on Sunday over Twitter that meetings between Americans and North Koreans were being held on the northern side of the inter-Korean truce village of Panmunjom, raising hopes for the resurrection of the summit.

“Our United States team has arrived in North Korea to make arrangements for the Summit between Kim Jong Un and myself,” wrote Trump. “I truly believe North Korea has brilliant potential and will be a great economic and financial Nation one day. Kim Jong Un agrees with me on this. It will happen!”

“A U.S. delegation is in ongoing talks with North Korean officials at Panmunjom,” said Heather Nauert, spokesperson of the U.S. State Department, in a statement. “We continue to prepare for a meeting between the president and North Korean leader Kim Jong-un.”

Much of the communication between the United States and North Korea has happened via their intelligence network, especially as Mike Pompeo’s first visit to Pyongyang at the beginning of April was while he was still director of the Central Intelligence Agency and secretary of state nominee.

Choe’s participation in the discussions at Panmunjom with U.S. officials indicates discussions have entered the diplomatic level to officially iron out various details of negotiation.

Hooker, a former East Asian and Pacific affairs analyst with the U.S. State Department Bureau of Intelligence and Research, was appointed director for Korean affairs at the NSC in 2014. When James Clapper, then-director of National Intelligence, visited the North in November 2014 to negotiate the release of two Americans held prisoner, Hooker accompanied him. Clapper’s negotiating partner at that time was Kim Yong-chol, then-head of the North Korean People’s Army’s Reconnaissance General Bureau, its main spy agency, and current director of the North’s United Front Department, which is responsible for inter-Korean relations.

Hooker was also a part of a U.S. delegation led by Ivanka Trump, daughter of the president and his senior adviser, that attended the closing ceremony of the PyeongChang Winter Olympics at the end of February. Kim Yong-chol was one of the officials who accompanied the North Korean leader in his May 26 summit with Moon at the Panmunjom and also led the North Korean delegation to the South during the Olympic closing ceremony.

Schriver, a former deputy assistant secretary of state for East Asian and Pacific security affairs, accompanied Pompeo to Pyongyang in early May.

The North’s diplomatic channels have been in gear since North Korean First Vice Foreign Minister Kim Kye-gwan in a statement on May 16 threatened to pull out of the North-U.S. summit, after Pyongyang abruptly canceled high-level inter-Korean talks. Vice Minister Kim found fault with U.S. National Security Adviser John Bolton’s call to use the Libya model of denuclearization on Pyongyang. Libya agreed to abandon its nuclear program in return for sanctions relief in 2003, seen by Pyongyang as a direct cause of the downfall of leader Muammar Qaddafi and his death in 2011.

Choe’s saber-rattling statement last Wednesday calling U.S. Vice President Mike Pence a “political dummy” and threatening a possible “nuclear showdown,” was seen to have struck a nerve with Trump, prompting him to cancel the Singapore summit in a public letter addressed to leader Kim Jong-un Thursday.

First Vice Foreign Minister Kim released immediately a conciliatory statement Friday, expressing great regret over the cancellation of the summit, and a surprise second summit upon the request of Pyongyang was held between President Moon Jae-in and North’s Kim on Saturday. Trump, in turn, signaled by Saturday that preparations for a U.S.-North meeting were still underway, though he has yet to officially greenlight the summit.

And in turn, the White House has been making preparations through multiple tracks of dialogue.

A separate U.S. advance team of 30 officials led by Joseph Hagin, the deputy White House chief of staff for operations, flew to Singapore Sunday to figure out logistics and security issue, along with how to handle press if the summit takes place.

Hagin served as deputy chief of staff to President George W. Bush from 2001 to 2008.

Kim Chang-son, the director of the North’s State Affairs Commission Secretariat, who serves as leader Kim’s chief of staff, was reported to be part of a North Korean delegation in Beijing on Monday, apparently en route to Singapore for talks with the United States.

Another track is the original intelligence channel, and there is keen interest to see if there is a follow-up high-level meeting between Pompeo and North Korea’s Kim Yong-chol.