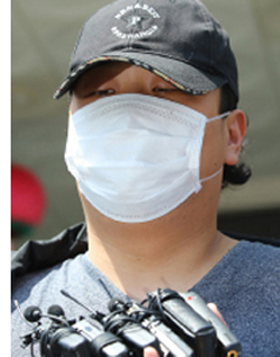 A murder suspect on Monday is taken from the Suseo Police Station, southern Seoul, to the Seoul Central District Court for a hearing on whether to issue an arrest warrant for him. [YONHAP]

A 28-year-old man surnamed Gang fatally stabbed two security guards in their 60s at an apartment complex in Gangnam District, southern Seoul, on Saturday night and turned himself into police within two hours.

“Gang stabbed two security guards when he met them in front of the security office of the apartment complex around 9 p.m. Saturday,” said a spokesman for the Suseo Police Precinct in Gangnam on Sunday.

According to police, Gang turned himself in at around 10:20 p.m. by walking into a local branch office of the Suseo Police Precinct, located about 750 meters (0.46 miles) from the apartment complex in Segok-dong, Gangnam District.

“I just killed someone,” he told police.

Police said Gang was sober at the time. He was wearing a black hat, a surgical mask, sunglasses and a pair of gloves. In his bag they found a knife and an ax. Police found blood on his gloves and on a pack of cigarettes that he was carrying, and arrested him.

“We arrested him there and then,” said the spokesman. “But when we investigated him, he did not have any criminal record. He also does not have a job.”

“He told police that he’s been taking medicine for mental illness and that he keeps hearing things,” he continued. “But his testimony wasn’t very well organized. He kept going back and forth about things and not making much sense.”

A Seoul court was scheduled to hold a hearing Monday on whether to issue an arrest warrant for Gang.

Gang has been living with his parents at the apartment complex. His neighbors recalled some eccentricities about the suspect.

“Gang carried a hatchet in the back of his pants, as a construction worker would,” an employee of a restaurant located in the apartment complex told the JoongAng Ilbo. “I told a lady who ran a convenience store next to the restaurant to watch out for him, and she told me, ‘Actually that’s my son and he has a mental illness, so do not talk to him and be careful.’”

The two security guards, both in their 60s, were brothers-in-law.

“The older guy started working here in February 2017 and later introduced his brother-in-law,” a coworker told the JoongAng Ilbo.

“I don’t think the guards had any trouble getting along with the residents,” a resident of the complex told the JoongAng Ilbo. “They were always friendly.”

“We will be questioning Gang’s relatives and examining his medical records to try to uncover why he committed the crime,” said the police officer.