Matriarch of angry Cho clan is grilled about abuse

Matriarch of angry Cho clan is grilled about abuse 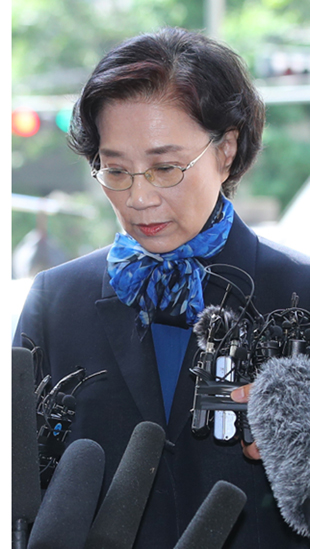 Lee Myung-hee, wife of Hanjin Group Chairman Cho Yang-ho and mother of two daughters notorious for anger management issues, faces reporters at the Seoul Metropolitan Police Agency on Monday as she appears to be grilled over allegations of verbally and physically assaulting employees. [YONHAP]

Standing before reporters in a somber mood at the Seoul Metropolitan Police Agency, Lee, 69, said she was “sorry” for the scandal and would “sincerely attend the questioning.”

Lee is accused of verbally and physically assaulting current and former Hanjin employees including a maid, chauffeur and construction workers at a hotel construction site.

In one video clip recorded in 2014 which went viral several weeks ago, Lee was seen trying to grab a female worker and throwing stacks of documents on the ground at a hotel construction site, venting her displeasure with the work done.

The police have obtained testimony from 11 people accusing Lee of hurling verbal abuse and even sharp objects like scissors. Many of the alleged victims want Lee to be criminally prosecuted, according to police.

Lee’s questioning came weeks after Cho Hyun-min, her 35-year-old second daughter, found herself under public scrutiny for allegedly throwing fruit juice and a glass at advertising agency employees during a meeting in March. Police wanted to arrest Cho, but prosecutors said the victims didn’t want to press charges against Cho.

But many of the people abused by the mother want her prosecuted. If it is found that Lee threw scissors at an employee, it would be such a serious charge that she can be prosecuted regardless of whether the victim files a complaint.

Lee’s oldest daughter, Cho Hyun-ah, became the subject of global ridicule in 2014 when she ordered a taxiing Korean Air plane at New York’s John F. Kennedy Airport to return to a gate to eject the chief flight attendant.

The 43-year-old daughter was enraged for the way a flight attendant served macadamia nuts to her. She wanted the nuts served on a plate, but they were served in an unopened package.

She screamed at flight attendants and had them kneel before her in first class in apology. Cho was later convicted of obstruction of business and served several months in prison.

The nut-rage protagonist returned to a management position at Hanjin Group earlier this year but was forced to step down along with her younger sister after the “bottle rage” case.

For many South Koreans, the trio epitomize the arrogance of chaebol family members who behave like feudal lords with their underlings.

After the water-rage scandal erupted, many signed a petition on the Blue House website to take the word “Korean” out of Korean Air, the country’s largest airline, which is owned by the Hanjin Group.