All eyes on Lee as Korea beats Honduras 2-0

All eyes on Lee as Korea beats Honduras 2-0 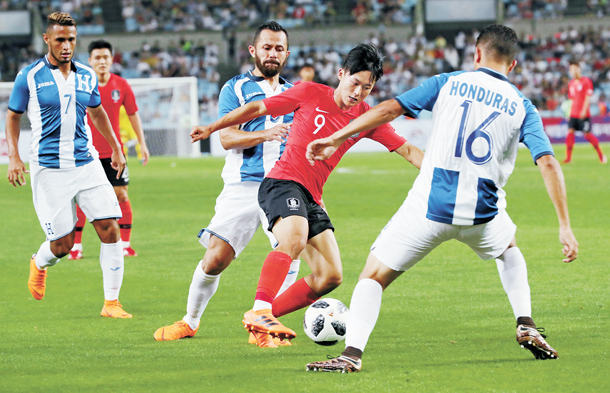 From left: Lee Seung-woo, second from right, dribbles against Honduran players during a friendly match at Daegu Stadium on Monday. [YONHAP]

The Korean national football team defeated Honduras 2-0 in a friendly match at Daegu Stadium on Monday. 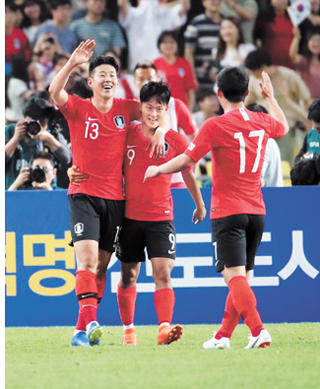 Head coach Shin Tae-yong opted for a familiar 4-4-2 formation with Son Heung-min of Tottenham Hotspur and Hwang Hee-chan of Red Bull Salzburg as the two strikers. As Shin is yet to come up with a final roster for the fast-approaching World Cup, the preliminary match against the 59th ranked team in the world was an opportunity for players to make their mark ahead of the final lineup announcement expected later this week.

The inclusion of Hellas Verona winger Lee Seung-woo raised a few eyebrows as the 20-year-old has never earned a cap with the senior national side. Though Lee didn’t score a goal, his debut was a success as he was responsible for setting up Son’s opening goal of the match.

Shin has yet to settle on a final 23-man roster for the World Cup. On May 14, he announced a final pool of 28 players, five more of whom would have to be dropped before the roster was announced. Shin’s decision was made a little easier last week after Gangwon FC’s Lee Keun-ho and Dijon FCO’s Kwon Chang-hoon, both midfielders, dropped out due to injury.

The loss of Lee and Kwon means that Shin will still need to drop three more players before announcing the World Cup roster. He’s also left with a major hole in midfield to fill - Lee is one of Korea’s most seasoned players with 84 national appearances. Kwon has played for the senior team 16 times.

“The new guys played hard, and their hard work lifted the mood of the entire team,” Shin was quoted as saying on Yonhap.

Despite the concerns, Shin may have managed to strike the balance between new and experienced players to plug the holes in the team. While Korea struggled to score throughout the first half, Lee Seung-woo kept the team going with his speed and didn’t fall behind the bigger players. With the help of Lee, Son, who served as captain as Swansea City’s Ki Sung-yueng sat out due to lower back pain, broke the stalemate in the 60th minute. Incheon United’s Moon Seon-min extended Korea’s lead in the 73rd minute with his first goal for the national team.

Lee’s performance may well have been enough to secure his spot on the 23-man roster.

“Lee Seung-woo is persistent and has good football sense,” Shin said after the match. “Since we previously worked together at the U-20 FIFA World Cup, he knew the kind of play I wanted and lived up to my expectations.”

Lee’s inclusion in Shin’s list of 28 possible players came as a surprise on May 14. At age 13, Lee left for Spain to play football, just like Son, who dropped out of high school to move to Germany. During the U-20 FIFA World Cup in 2017, Lee was a crucial player, leading the team to the round of 16. But his inclusion in the senior team still came as a surprise as the young winger has little experience playing for a senior club.

“Instead of feeling the pressure of scoring goals, I’m in a position to create opportunities for my teammates,” Lee was quoted as saying. “I had a different mindset coming into this match. I knew that I could fulfill my dreams, so that motivated me to make more runs.”

Veteran striker Son, one of the most successful Korean players ever, was also impressed with Lee’s performance.

“I remember my national team debut,” Son said. “Seung-woo played well [in his] first match. Rather than getting excited about one good game, I hope he continues to play well.”

In addition to Lee, Moon has also increased his chance of playing at the World Cup, as he scored his first goal for the national team. Moon came on as a substitute in the 54th minute after Crystal Palace’s Lee Chung-yong left the field with a hip injury. At age 25, Moon is the oldest player in Korean football history to score a debut goal.

Before heading to Austria for training on Sunday, Korea will play another friendly match against Bosnia and Herzegovina on Friday. Shin will announce his final 23-man World Cup roster on Saturday.

Korea is assigned in Group F at the World Cup with Sweden, Mexico and Germany. Korea will play its first game against Sweden on June 18.