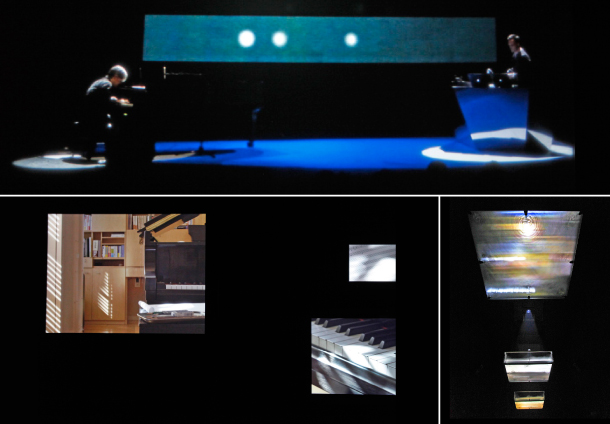 Music can be more fully appreciated when it is presented to the eyes as well as the ears, according to renowned musician Ryuichi Sakamoto, the first Asian to win the Academy Award for Best Original Music Score with his work for “The Last Emperor” in 1988.

The musician has been a leading force in incorporating visual elements into music as well as the history of electronic music as a member of the pioneering band Yellow Magic Orchestra.

“Ryuichi Sakamoto: Life, Life,” his first exhibit in Seoul, opened at the new gallery Piknic in Jung District, central Seoul. The musician has had a long career scoring films like 2017’s “Call Me by Your Name” or 2015’s “The Revenant” in addition to releasing solo records. His music now has expanded past the limitations of instruments, and reflects inspirations that come from any sound that passes by him.

“I basically tend to like something new,” said Sakamoto Ryuichi, during an artist talk he had held Friday at Piknic, one day before the opening of the exhibition. “[My music] comes from my interests in new sound, and because that sound is new I get to feel some kind of inspiration, and sometimes I find something new from some old and familiar sound.”

He continued on discussing how he is still curious about what new sounds a piano can create even through he has been playing the instrument since he was 3 years old. His relationship with the piano goes beyond playing the keyboard with his fingers. Sometimes Sakamoto uses chopsticks and vinyl to manipulate the piano and finds sounds that he has yet to discover from playing it his entire life.

Finding new sounds pushes Sakamoto to think more about how space makes an impact on music as well, especially after his most recent album “Async,” released last year. At the exhibition, there is a room dedicated to displaying videos of the spaces where he worked to make the album. Each video shows one angle of his studio, and visitors can experience what Sakamoto saw and heard while working on his music. Some videos are of a window from inside and capture the subtle sound of wind blowing, while others show a piano with ambient noise in the background. 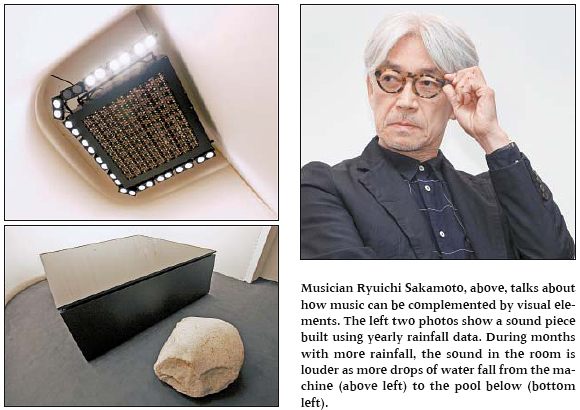 “The music for the album was made as I was thinking how certain sounds will be heard in certain spaces, so the sound I have ready in this exhibition is a lot closer to the core sound that I had thought of than the music recorded into my album,” said Sakamoto. The exhibit offers visitors a chance to hear the music from “Async” in a room set up with a 5.1 surround sound system. The musical experience is enhanced with videos made by media artist Shiro Takatani and Thai filmmaker Apichatpong Weerasethakul, which play in sync with the sound.

“It will become fuller if the real-time sound of someone playing is provided whilst the sound of a certain instruments plays, or someone stepping whilst a sound of someone walking plays, but that means I have to be here playing my music until the end of the exhibit, so this comes a little short of the ideal sound experience I have in mind,” said Sakamoto. He added that he may come back again to Seoul before the exhibit closes in October.

The Japanese artist built a friendship with Korean artist Nam June Paik in New York. Sakamoto said he admired Paik ever since he was 10 years old. They met in 1984 and worked together to create video artwork. One of their collaborative works, “All Star Video,” can be watched in full at the exhibition, and a performance Sakamoto held in 2013 in tribute to Paik is on display right across from it.